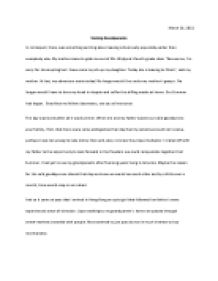 ﻿March 16, 2012 Visiting Grandparents In retrospect, there was something exciting about leaving school early especially earlier than everybody else. My mother came to grab me out of Ms. Wojtyna?s fourth grade class. ?Excuse me, I?m sorry for interrupting but I have come to pick up my daughter. Today she is leaving to China?, said my mother. At last, my adventure starts today! No longer would I be under my mother?s grasps . No longer would I have to bore my head in despair and suffer the stifling weeks at home. Our Summer had began. Good-bye my fellow classmates, see you all next year. The day was lovely after all it was Summer. When me and my father waved our solid goodbyes to your family, I felt, that there were some ambiguities that day that my antennas could not receive, perhaps I was too young to take notice then and, also, to know the proper behavior. I trailed off with my father to the airport only to look forward in the freedom we could compensate together that Summer. ...read more.

Many times I would be astounded to look out the window and compare the desolate streets to the ones during the day. Then I would go back to sleep and wake up to a bright morning. Still all but one were asleep. I suppose my grandmother noticed my morning patterns and she decided to share her special albums of her nephews or my cousins that she respectfully displayed on top of the couch. We laughed and enjoyed many of the pictures that showed a story of human growth within a family setting. She offered me one piece of green tea mochi candy that my mother gave her as a gift. The sweet candy melting in my mouth resonated the moment I shared with my grandmother, simply happily at ease. During dinnertime we would all sit around those small folded up tables that come by cheaply over the market. The dishes steamed on the table but as I looked over I didn?t have much of an appetite. My grandmother would sternly warn me that I?m too thin and that I need to eat more. ...read more.

I nodded. When he came back he sat down on the sofa with a warm cup of milk in his hands and another cup in his other hand. He poured some milk into the other cup and gave it to me. As he was pouring his milk, my grandmother screamed at him consistently to not share the same cup because he?s a an old man with probably some diseases that could be contagious. I couldn?t help but grin and drank the warm milk that filled my insides with warmth too. From the act of kindness that my grandparents showed me, I realized that they?re not cruel people. They still loved me even though I had done things they disliked. I realized my faults while living with them. I took advantage and showed greed while staying in their home. Never once did I thought to share or ask if they wanted a portion of the piece I held. Sharing is important because in many ways it shows others that we care, respect, and consider others. Even though sharing something we enjoy to another may not entirely make their day the happiest it is the best feeling and worth to know that we could give bit of happiness to someone else. ...read more.