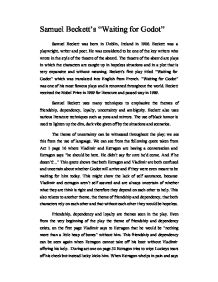 Samuel Beckett's "Waiting for Godot" Samuel Beckett was born in Dublin, Ireland in 1906. Beckett was a playwright, writer and poet. He was considered to be one of the key writers who wrote in the style of the theatre of the absurd. The theatre of the absurd are plays in which the characters are caught up in hopeless situations and in a plot that is very expansive and without meaning. Beckett's first play titled "Waiting for Godot" which was translated into English from French. "Waiting for Godot" was one of his most famous plays and is renowned throughout the world. Beckett received the Nobel Prize in 1969 for literature and passed way in 1989. Samuel Beckett uses many techniques to emphasize the themes of friendship, dependency, loyalty, uncertainty and ambiguity. Beckett also uses various literature techniques such as puns and mirrors. The use of black humor is used to lighten up the dim, dark vibe given off by the situations and scenarios. ...read more.

Again on page 32 when Vladimir asks "you want to get rid of him?" Pozzo replies " I do...". Despite Pozzo allowing Lucky to depart, Lucky is reluctant to; this shows the loyalty that Lucky had gained throughout the years that he has been with Pozzo. Another theme that appears within the dramatic works of Beckett is the theme of ambiguity. Ambiguity can be seen within the play "Waiting for Godot" in the way lines are being said. The language that the characters use is very unclear and allows different ways of thinking. An example of this is on page 29 when Pozzo places the pipe in his mouth and says, "The second is never as sweet...as the first, I mean. But it's sweet just the same." This quote struck me as being ambiguous because he first states that the pipe isn't "as sweet" as the second but then says "it's sweet just the same". I feel that Beckett might have used ambiguity to give the reader or audience the chance to see two different sides to the scene or dialogue. ...read more.

From the mirror of Godot we could say that Estragon and Vladimir can be seen as the two thieves that were crucified beside Christ. A quote that supports this can be seen in act 1 on page 14 when Vladimir begins to tell the story "Our Savior. Two thieves. One is supposed to have been saved and the other one damned." This quote could be interpreted as Estragon and Vladimir being the two thieves. I suspect that Beckett might have used mirrors to give meaning to the plot and shed some light on what is happening. If you imagine it as the two thieves asking and waiting God to come and forgive them and set them free. Through the use of various literature techniques such as mirrors, black humor and comedy, the reader can successfully reflect back on the issues and themes that are discussed and portrayed in this play. In conclusion, Beckett uses these techniques and themes to create meaning and shed some light on the gloomy and confusing plot. This then entices the reader and audience to continue to watch or read and allows them to think much more about what they have just witnessed. ...read more.