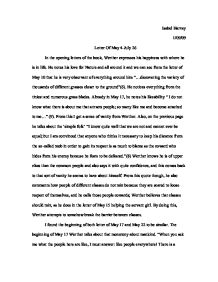 Isabel Harvey 1/09/09 Letter Of May 4-July 26 In the opening letters of the book, Werther expresses his happiness with where he is in life. He notes his love for Nature and all around it and we can see from the letter of May 10 that he is very observant of everything around him "...discovering the variety of thousands of different grasses closer to the ground"(6). He notices everything from the tiniest and numerous grass blades. Already in May 17, he notes his likeability " I do not know what there is about me that attracts people; so many like me and become attached to me..." (9). From this I get a sense of vanity from Werther. Also, on the previous page he talks about the 'simple folk' "I know quite well that we are not and cannot ever be equal; but I am convinced that anyone who thinks it necessary to keep his distance from the so-called mob in order to gain its respect is as much to blame as the coward who hides from his enemy because he fears to be defeated."(8) Werther knows he is of upper class than the common people and also says it with quite confidence, and this comes back to that sort of vanity he seems to have about himself. ...read more.

(10). To Werther, this sort of knowledge is somewhat useless. He believes that rather than learning from books, one should learn from Nature. He comments on this in his letter of May 26, "the person who takes direction form rules alone will never produce anything in bad taste, in the same way as the person who allows himself to be shaped by rules of social convention can never become and intolerable neighbor or a conspicuous villain; on the other hand, any rule is likely to destroy both the true feeling of Nature and its true expression..." (14) Werther is so passionate in feeling of nature, he sort of mocks people that live based on rules, and learn through books, like V. he believes your true feelings and beauty come out through Nature, and not only simple rules. The letter of June 16 was an emotional one for Werther. He talks about how he has found love. As he was writing his letter, he showed extreme happiness and indecisiveness. He couldn't sit down and write the letter. His emotions were much too strong to write and explain on paper, he could never get all of his feeling to Wilhelm across. In between his letters, he would get up and leave so see this girl he loved so much, he couldn't stay away from her. ...read more.

He is completely aware though, that she is engaged, but this doesn't seem to bother him much. During the dance, the night they met was when he first found out she was engaged. "'who is this Albert?'... 'Albret is a fine man to whom I am as good as engaged.'"(28). Werther had also been warned about his before even meeting her, "'Be careful that you do not fall in love with her!'...'she is already engaged'"(22). To Werther and Lotte this does not seem to bother them, at least during that night. "She promised me the third and assured me with the most charming frankness that she was very fond of dancing in the German way" (26). The German dance is known as a couples dance, and this shows that she does have some affection and interest for Werther. They both dance throughout the night and nothing worries them, until the storm hits. The storm broke up the party, and some ways foreshadows the split between Werther and Lotte, and acts as a warning to Werther that a split is coming up. Also foreshadowing is the part when Werther tries to draw the portrait of Lotte, but instead ends up only drawing a silhouette of her. "three times I have started Lottes portrait, and three times I have bungled it...finally I gave up and cut her silhouette..."(50). This foreshadows Albert's arrival, and the separation between Werther and Lotte. ...read more.