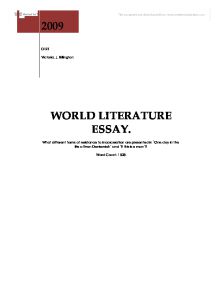 What different forms of resistance to incarceration are presented in `One day in the life of Ivan Denisovich and `If this is a man?

They took away everything that was held dear. The Nazis of the German Death Camps killed innocent people's family and friends without warning, leaving the prisoners to wonder what had happened to their loved ones and whether they were ever coming back. They gave them work without purpose and let them feel they were worthless. They took away their names, they didn't let them bathe, their hospital was the safest place to be and even then it wasn't completely safe because if your injury or illness was too severe they would simply kill you. Recently I have found that Primo Levi himself once quoted, free from the bounds of his more solemn and emotion-lacking novel, that `I am constantly amazed by man's inhumanity to man.� and I am shamed to say I agree, not only in Auschwitz, but throughout the world. Auschwitz reduced men to their lowest, and though there were a great amount that let themselves be pulled downward by the depths of despair, the majority tried their very best to survive. Some attempts at resistance were unsuccessful, like the meeting of the Italians when Levi says "We Italian's had decided to meet every Sunday evening in a corner of the Larger, but we stopped at once, because it ...read more.

Those who lick other men's left-overs, those who set store by the doctors, and those who peach on their mates." (Page 8) This short but powerful statement indicates that the men must show pride and not give in to the guards or the wardens or anyone else that works in the hell which they much call home for months, years, if not decades. They must resist the temptation to finish other men's food and under no circumstances should they take the opportunity to 'peach' on one of their comrades, as its will most likely be immediate death sentence, served by said comrades, as mentioned previously in the novel. In conclusion, the different forms of resistance to incarceration are presented in `One day in the life of Ivan Denisovich� and `If this is a man� are astonishingly great. Ranging from mental to physical resistance, from emotional to plain nonsensical resistance, from the smallest of movements to a grouped decision of the protection of others, these two novels display a shocking variety of resistance, some of which led some of the prisoners to die of natural causes, instead of the barbaric murders that some were sentenced to in `If this is a man� and `One day in the life of Ivan Denisovich�. ?? ?? ?? ?? World Literature Essay, Draft 1. Victoria J Billington. D1RT. ...read more.