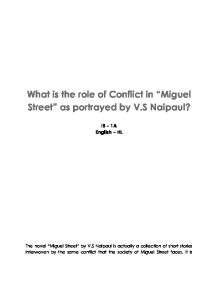 What is the role of Conflict in Miguel Street as portrayed by V.S Naipaul?

What is the role of Conflict in "Miguel Street" as portrayed by V.S Naipaul? IB - 1A English - HL The novel "Miguel Street" by V.S Naipaul is actually a collection of short stories interwoven by the same conflict that the society of Miguel Street faces. It is written into different chapters, each sketching a different protagonist of its own, ending with failure. However the narrator throughout the novel is one, a small unnamed boy who becomes mature along with his age as the novel progresses. Apart from that the continuous presence of almost all the characters throughout the novel keeps the book intact. The fascinating thing about the Miguel Street is that everyday an eventful event takes place. After I finished reading all the chapters of the book, I noticed a common conflict that the Miguel Street faces, which is that almost every member of the society of Miguel Street attempts to escape reality and almost all of them as a result end up with nothing but failure. Except for Elias and the narrator boy, no one has any ambitions, which makes the Miguel Street a 'slum'. ...read more.

Mrs. Hereira is another victim of 'escaping reality'. She gives up everything; she gives up a very nice and rich person, just for her beloved Toni, even though Toni is very poor and cruel. He beats her most of the time and Mrs. Hereira runs out to the narrator boy's mother. Narrator's mother in the beginning calms her down by telling her that everything will get better with time. But, when narrator's mother sees that Mrs. Hereira's conflict with her husband is not settling down but getting worse everyday, she advices her to leave Toni as he is no good for you. But Mrs. Hereira keeps on taking Toni's side by supporting him and making the narrator's mother wrong about her views of Toni. So here we can see that she is avoiding reality because she knows that Toni is not good and does not love her but still she keeps on taking Toni's side to keep his image. However, she gives up escaping reality at the end and goes back to her previous husband Henry. Another woman who tries to avoid reality is Laura. She is a happy woman always enjoying every second of her life. ...read more.

However, he brings home a woman and marries her even after seeing what had happened to his own brother Edward, when he brought a woman, as the narrator boy's mother puts it "You see how man stupid. Hat sees what happen to Edward and you mean to say that Hat still get hisself mix up with this woman?" They lived "like two strangers" as Eddoes observes it and what happens to their relationship is nothing new to the society of Miguel Street. Hat's wife Dolly runs away with another man with all the expensive gifts that Hat had given to her. Hat tracks her down, beats her and hands himself over to the police. I have just highlighted some of the inhabitants of the Miguel Street and how they are plunged into the conflict of 'escaping reality'. As we see Bogart, Popo, B. Wordsworth, Mrs. Hereira, Laura, Bolo and Hat, all in one or the other way were escaping reality and therefore ending up with nothing but failure. In fact, almost everyone in Miguel Street ends up with failure and perhaps that's why Miguel Street is described as 'limited, and limiting. Therefore the only way to escape the limitations of a society like Miguel Street is to leave it altogether as the narrator boy does. ?? ?? ?? ?? The Conflict in "Miguel Street" ...read more.