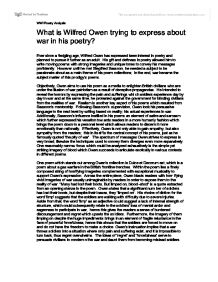 What is Wilfred Owen trying to express in his war poetry?

What is Wilfred Owen trying to express about war in his poetry? Ever since a fledgling age, Wilfred Owen has expressed keen interest in poetry and planned to pursue it further as an adult. His gift and deftness in poetry allowed him to write moving poems with strong imageries and unique tones to convey his messages proficiently. However until he met Siegfried Sassoon, he needed a subject to be passionate about as a main theme of his poem collections; in the end, war became the subject matter of this prodigy's poems. Objectively, Owen aims to use his poem as a media to enlighten British civilians who are under the illusion of war patriotism as a result of deceptive propagandas. He intended to reveal the horrors by expressing the pain and sufferings which soldiers experience day by day in war and at the same time, he protested against the government for blinding civilians from the realities of war. Realism is another key aspect of his poems which resulted from Sassoon's mentorship. Following Sassoon's supervision, Owen took his persuasive language to the next level by writing based on reality; his actual experiences in war. ...read more.

Owen's insinuation implies that a war throws soldiers into a situation where only pain and suffering exist, and it is impossible to turn back, thus regret overwhelms. The ideas of 'regret' and 'forcefulness' serve to persuade civilians to condemn the war and daunt them from becoming mislead soldiers. In order to maximize the emotional impact on readers Owen continues to exaggerate the terrorizing imageries by quoting 'blood-shod' instead of blatantly stating the equivalent: 'bloody feet'. This vivid imagery of the 'shoe of blood' hyperbolizes the pain experienced by soldiers and from my point of view, Owen's usage of the word blood has more connotations attached to it than the obvious definitive noun itself. The concept of blood prevails in other war poems by Owen such as The Sentry and Mental Cases. In Mental Cases, Owen states that soldiers 'wade' in blood, and the poem's allusion to Shakespeare's Macbeth suggests that blood represents guilt in war just as blood represents guilt in Macbeth. The representation of blood as guilt exists in ActX SceneX where Macbeth is shocked by his deeds when he observes the blood of Duncan on his hands/dagger, likewise this idea is conjured up in ActXSceneX where Lady Macbeth is mentally unstable and tries to wash away the imaginary blood from her hands. ...read more.

The interconnectedness of 'blood' as a single entity to convey various interlinked conjectures in various poems effectively expresses Owen idea of physical pain, mental suffering/regret and rightful blameworthy. This relatively simple imagery which Owen extensively defined captures the essence of war as a tragedy which civilians must be aware of. He articulates straightforward themes in a diverging manners which exposes readers to other facets of war which are hidden by the British government. I presume that the way 'blood' is interpreted as an imagery in Owen's poem is subject to individual filters and paradigms. Different mindsets would derive different deductions from the imagery; for example, I view 'blood' as a portrayal of humanity and its thus bloodsheds imply on the loss of humanity as a consequence of the war. Therefore the perception of 'blood' in Owen's poems is subjective and may have diverse interpretations. Contradictory to what Owen's poems usually express, the imagery of blood is arguably not used to gain sympathy from readers like the other poems, however, it serves to warn or in other words, to frighten readers with the bloody realities of war. Perhaps, aside from expressing 'the pity of war', exposing the shocking realities of war to warn readers is another subset of his aim in composing war poetries. WWI Poetry Analysis WWI Poetry Analysis ...read more.