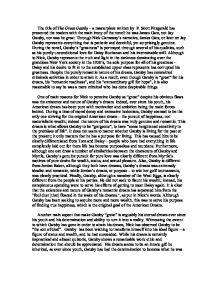 The title of The Great Gatsby - a masterpiece written by F. Scott Fitzgerald has presented the readers with the main irony of the novel: he was James Gatz, not Jay Gatsby, nor was he great. Through Nick Carraway's narrative, James Gatz, or later on Jay Gatsby represents everything that is pathetic and deceitful, yet surprisingly genuine. During the novel, Gatsby's "greatness" is portrayed through several of his qualities, such as his purely unconditional love for Daisy Buchanan and his interminable will. Although to Nick, Gatsby represents the truth and light in the darkness dominating over the grandiose New York society in the 1920's, the sole purpose for all of his greatness - Daisy and his desire to fit in to the established upper class represents has corrupted his greatness. Despite the purely romantic nature of his dream, Gatsby has committed criminals activities in order to attain it. As a result, even though Gatsby is "great" for his dream, his "romantic readiness", and his "extraordinary gift for hope", it is also reasonable to say he was a mere criminal who has done despicable things. One of main reasons for Nick to perceive Gatsby as "great" despite his obvious flaws was the existence and nature of Gatsby's dream. ...read more.

During Gatsby's funeral, his father - Henry Gatz was very proud to show Nick Gatsby's detailed schedule for self improvement ever since he was young; Mr. Gatz also told Nick, "Jimmy was bound to get ahead. He always had some resolves like this or something". He did all he could in order to improve himself, for example: "Rise from bed...Dumbbell exercise and walking...Study electricity...Work...Baseball and Sports...Practice elocution, poise and how to attain it...Study needed inventions". Even though later on Gatsby was surrounded with tremendous wealth, his American dream has never been tainted with materialistic greed, even in an era of decayed social and moral values. Indeed, Gatsby himself embodied the pristine original American dream with its themes of hard work, self-improvement, happiness, and individualism, although in the surrounding society, the American dream was corrupted - the original pursuit of happiness has turned into a quest for wealth and pleasure. It is clear that Gatsby did not pursue power and money simply for greed or prestige, he did everything he did, whether through criminal means or not, simply for his dream, and his dream is embodied in Daisy. ...read more.

Nevertheless, considering the setting in which the story takes place, when surrounding society was filled with corruption and hedonism, it is arguable that Gatsby is indeed a great man; yet, due to his nature and dream, he does not belong to the surrounding society. In conclusion, what makes Gatsby a great person rather than a vain criminal is the driving force behind his relentless pursuit of his dream. Years earlier, he was a poor young man, charmed by the most popular girl in Louisville who was in favor of a wealthy bachelor, and since then he has been spending a lifetime to get her back. Although the society around him is rotten, although his ideal lover - Daisy, whose voice is "full of money", is certainly not a worthy subject of his affection, although his own ways of achieving wealth were corrupt, Gatsby's longing for a "fairytale" love and his willingness to sell his soul for it have justified the book's title. Gatsby is indeed a great man. However, an idealist and dreamer like him does not belong to the rotten society in which he lives in. All the criminals acts that he has committed and all the pretentious and grandiose acts were are the purest things in this sordid tale. ...read more.