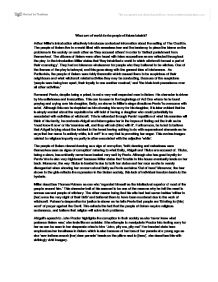 What sort of world do the people of Salem inhabit?

What sort of world do the people of Salem inhabit? Arthur Miller's introduction effectively introduces contextual information about the setting of The Crucible. The people of Salem live in a world filled with senseless fear and the tendency to place the blame on the problems in the society on each other as 'they accused others' in order to 'deflect punishment from themselves'. The citizens of Salem were often faced with false accusations as are reflected throughout the play. In the introduction Miller states that 'they inhabited a world in which witchcraft formed a part of their cosmology'. They had no tolerance whatsoever for people who they believed to be witches. One of the themes of the play is betrayal, and this goes along with the general idea of intolerance. ...read more.

This is reiterated through Parris' repetition of what his enemies will think of his family, he confronts Abigail and interrogates her in the hopes of finding out the truth as he 'must know it now' or his 'enemies will, and they will ruin [him] with it'. Furthermore, he is led to believe that Abigail is lying about the incident in the forest having nothing to do with supernatural elements as he says that her name 'is entirely white, is it not?' in a way that is provoking her anger. This evokes images related to religious impurity as purity is often associated with the adjective 'white'. The people of Salem viewed dancing as a sign of corruption, 'both dancing and nakedness were themselves seen as signs of corruption' referring to what Betty, Abigail and Tituba are accused of. ...read more.

Putnam's desperation for justice is shown as he tells Parris that people are 'thirsting for [his] word' of prayer against the Devil. This reflects the fact that the people of Salem require religious sustenance, and believe that religion will solve their problems. Abigail's speech to John Proctor highlights the corruption in their society as she 'never knew what pretence Salem was;' she feels like an outsider. She attempts to manipulate Proctor into feeling sorry for her as can be seen in her desperate cries to him: 'John, pity me, pity me!' Her frenzied state here emphasizes her loneliness in Salem which is also because of her loss of her parents at a young age as she 'saw Indians smash [her] dear parents' heads on the pillow next to [hers]', she describes this with strikingly vivid imagery. ...read more.