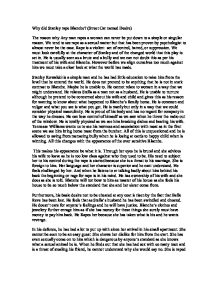 Why did Stanley rape Blanche? (Street Car named Desire) The reason why Any man rapes a woman can never be put down to a simple or singular reason. We tend to see rape as a sexual matter but that has been proven by psychologist to almost never be the case. Rape is a violent act of control, hatred, or suppression. We must look carefully at the character of Stanley and of the changed world that this play is set in. He is usually seen as a brute and a bully and we can not doubt this as per his treatment of his wife and Blanche. However before we align ourselves too much against him we must take a clear look at what the world has made. Stanley Kowalski is a simple man and he has had little education to raise him from the level that he entered the world. ...read more.

Tennesse Williams wants us to see his rawness and association with meat as in the first scene we see him bring home meat from the butcher. All of this is unquestioned and he is allowed to swing from menacing bully when he is losing at cards to happy child when is winning. All this changes with the appearance of the over sensitive Blacnhe. This makes his appearance be what it is. Through her eyes he is brutal and she advices his wife to leave as he is too low class against who they used to be. His need to subject her to his control during the rape is started because she is a threat to his marriage. She is foreign to him. Her language and her character is superior and he cant understand. He feels challenged by her. ...read more.

She shows her dislike for him from the start. She has even sexually come on to him which is dangerous by anyone's standard as she knows what a sexual animal he is. When he finds out that she has had sex with so many men and is a threat of stealing his friend, he cannot understand why she would say no. She is raped in revenge and because he feels that one more man shouldn't be any difference for somebody who is so easy with her sexual favours. Stanley is a basic animal and an animals first instect is to survive. In the animal world only the strongest survive and he reasserts himself as the man of the house and the one in charge. He takes control of the situation by sexually dominating her. The rape leaves a broken Blanche, a submissive Stella and a Stanley Kowalski who has regained his identity as a brute who will do what it takes to show the world he is on top. ...read more.