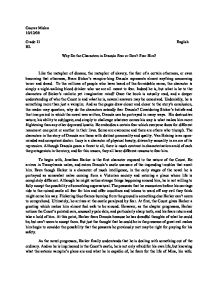 Why Do the Characters in Dracula Fear or Don(TM)t Fear Him?

Gaurav Mishra 10/12/08 Grade 11 English HL Why Do the Characters in Dracula Fear or Don't Fear Him? Like the metaphor of disease, the metaphor of slavery, the fear of a certain otherness, or even becoming that otherness, Bram Stoker's vampire-king Dracula represents almost anything concerning terror and dread. To the millions of people who have heard of the formidable name, the character is simply a night-walking blood drinker who we are all meant to fear. Indeed he is, but what is he to the characters of Stoker's realistic yet imaginative mind? Once the book is actually read, and a deeper understanding of who the Count is and what he is, several answers may be conceived. Undeniably, he is something more than just a vampire. And as the pages draw closer and closer to the story's conclusion, the reader may question, why do the characters actually fear Dracula? Considering Stoker's beliefs and the time period in which the novel was written, Dracula can be portrayed in many ways. His destructive nature, his ability to subjugate, and simply to challenge whatever comes his way is what makes him more frightening than any other depraved lunatic. He embodies a certain fear which everyone faces for different reasons at one point or another in their lives. Some are overcome and there are others who triumph. The characters in the story of Dracula are those with distinct personality and quality. ...read more.

She lacks the voluptuous qualities of her childhood friend Lucy and even though she is married in the novel, her sexuality is all throughout enigmatic. For the sake of her not becoming "unclean", she is left behind to do secretarial work while the rest of the characters go on a hunt for Dracula. It would be quite easy to say that she fears the Count simply for the lives of those who are close to her and are putting themselves against the peril of his evil. However, as we read the book, we know Dracula is after Mina, and Mina doesn't quite know this but considering the possibility, there is a lingering fear in her for becoming "soiled" or rid of her purity as was Lucy. Dracula poses a threat to her as he is someone different to her beliefs, and more so, the entire beliefs of Victorian society. He represents a challenge to the sexual repression that existed in that era. However, she is also shown as someone strong and unwilling to give in. For this reason, even though she is violated by the Count and left impure, with her ultimate triumph against Dracula; her purity remains as clean as her forehead unlike Lucy who had been subdued by sexual urges. The three suitors of the story, Arthur, Quincy, and Dr. Seward are characters who are put into a difficult situation in the story which allows them to transform their fear for Dracula into revenge. ...read more.

With his encyclopedic knowledge on how to ward off creatures as such, he is able to at least keep a calm piece of mind as he knows what's needed to be done to rid the world of the Count's evil. The fact that Dracula is the opposite of everything the characters in the novel stand for is what makes him a challenge to their lives. He is something more and something hard to comprehend, which makes him all the more unusual from your every day villain. He addresses the fear of an otherness and things we cannot understand. He can be seen as your worst nightmare, something perverse and against your beliefs, an invader, or even the devil himself. All in all he is an object of fear. To the three suitors he was something who continued to make their lives miserable and left them with no choice to finally overcome their fear and fight till his death. In metaphorical application, Dracula can not only be seen as a protean figure that evinces feelings of dread, but rather significant and challenging situations that we come across in our lives. The story is an examination of what certain types of people do when put in these situations. Dracula is a creature of undying sinister malevolence, and to each of the characters in the novel he represents something different: a moment in their lives that involves them sinking or swimming - overcoming or being overcome. ...read more.