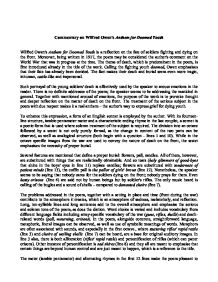 Commentary on Wilfred Owen's Anthem for Doomed Youth Wilfred Owen's Anthem for Doomed Youth is a reflection on the fate of soldiers fighting and dying on the front. Moreover, being written in 1917, the poem may be considered the author's comment on the World War that was in progress at the time. The theme of death, which is predominant in the poem, is first introduced already in the title of the work. Calling the fighting youth doomed, Owen emphasises that their fate has already been decided. The fact makes their death and burial seem even more tragic, inhuman, cattle-like and impersonal. Such portrayal of the young soldiers' death is effectively used by the speaker to arouse emotions in the reader. There is no definite addressee of the poem; the speaker seems to be addressing the mankind in general. ...read more.

Several features are mentioned that define a proper burial: flowers, pall, candles. All of them, however, are substituted with things that are realistically obtainable. And so tears (holy glimmers of good-byes that shine in the boys' eyes in line 11) replace candles; flowers are substituted with tenderness of patient minds (line 13), the coffin pall is the pallor of girls' brows (line 12). Nonetheless, the speaker seems to be saying that nobody cares for the soldiers dying on the front; nobody prays for them. Even hasty orisons (line 4) are said not by human beings but by soldier's rifles. The only music heard is calling of the bugles and a sound of shells - compared to demented choirs (line 7). The problems addressed in the poem, together with a setting in place and time (front during the war) ...read more.

The meter (iambic pentameter) and alternating rhymes in the first 12 lines make the poem pleasant to the ear and unify the work, which aids the communication of the important message that it carries. Aural imagery includes the discussed alliteration but also a repetition of sound t in lines 3 and 4 that is aimed at reinforcing the auditory image of the firing guns and rifles. The ending rhyme in the last couplet (lines 13 and 14) gives the ending a sense of finality. The poem provides the reader with a different approach to the subject of death and war. The author's reflection effectively provokes the reader to think and contemplate the problem independently. The style of the poem is well-matched to its content; it creates the atmosphere appropriate for the topic. Skillful use of auditory images and proper, solemn diction makes the poem an anthem that it is supposed to be. ...read more.