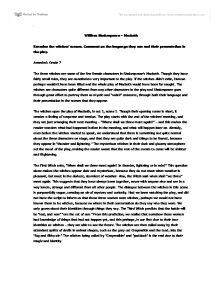 William Shakespeare - Macbeth Examine the witches' scenes. Comment on the language they use and their presentation in the play. Awarded: Grade 7 The three witches are some of the few female characters in Shakespeare's Macbeth. Though they have fairly small roles, they are nonetheless very important to the play. If the witches didn't exist, Duncan perhaps wouldn't have been killed and the whole play of Macbeth would have been for naught. The witches are characters quite different from any other characters in the play and Shakespeare goes through great effort to portray them as mystic and "weird" creatures, through both their language and their presentation in the scenes that they appear. The witches open the play of Macbeth, in act 1, scene 1. Though their opening scene is short, it creates a feeling of suspense and tension. The play starts with the end of the witches' meeting, and they are just arranging their next meeting - "Where shall we three meet again?" - and this makes the reader wonders what had happened before in the meeting, and what will happen later on. ...read more.

The witches are powerful, but they are not all mighty, we learn in lines 23-24. "Though his bark cannot be lost, Yet it shall be tempest-toss'd." The witches do not have supreme powers. They are capable of harming people, making prophecies, drain people "dry as hay", but not kill them. In addition to this, the witches are not invincible, the sole performers of their art, but they also have a queen, a goddess of witchcraft - Hecate. Hecate appears briefly in Act 3, scene 5, and her purpose, it seems, is only to have the First Witch to say:" Come, let's make haste; she'll soon be back again," giving the impression that the witches fear her greatly. Though despite their lack of certain powers, the witches are nonetheless cruel and nasty. The First Witch places punishments on the sailor, only because his wife did not give her chestnuts, and such cruel punishments they are too. "Sleep shall neither night nor day Hang upon his penthouse lid; He shall live a man forbid. Weary sennights nine times nine, Shall he dwindle, peak, and pine." ...read more.

In act 4, scene 1, we see the witches brewing a potion to call up magical "Apparitions" to make predictions to Macbeth. Through the ingredients they put into the potion, we see how horrific the witches' magic can be, for the potion contains, along with other things, "eye of newt," "liver of blaspheming Jew," "finger of birth-strangled babe." In this scene, it is really the Apparitions that make predictions for Macbeth, and the witches are there only to brew the potion and give instructions to Macbeth. They give curt instructions, and then vanish. The witches may have great power, yet it seems they only use their power to create disasters and tragedy. The First Witch wrecks the sailor's ship merely because his wife didn't give her the chestnuts she wanted. Then there is Macbeth. If the witches didn't tell Macbeth of his possibility to be "king hereafter," would the idea of murder have ever entered his and Lady Macbeth's minds? Would Duncan had been killed? It seems that the Witches' purpose in telling Macbeth the prophecy was to sow a seed for the murder. The witches, as Shakespeare portrayed them, are essences of evil, just as society at the time would view them, and add a sense of mystery and unreality to the play. ...read more.