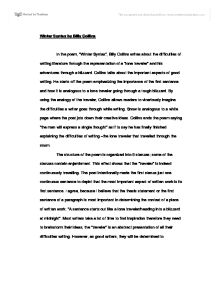 Winter Syntax by Billy Collins In the poem, "Winter Syntax", Billy Collins writes about the difficulties of writing literature through the representation of a "lone traveler" and his adventures through a blizzard. Collins talks about the important aspects of good writing. He starts off the poem emphasizing the importance of the first sentence and how it is analogous to a lone traveler going through a tough blizzard. By using the analogy of the traveler, Collins allows readers to vicariously imagine the difficulties a writer goes through while writing. Snow is analogous to a white page where the poet jots down their creative ideas. Collins ends the poem saying "the man will express a single thought" as if to say he has finally finished explaining the difficulties of writing -the lone traveler that travelled through the storm. The structure of the poem is organized into 6 stanzas; some of the stanzas contain enjambment. ...read more.

To "lift a gun from the glove compartment and toss it out the window into the desert heat" shows how writers can sometimes feel like fugitives when they do not get their work done, the gun can symbolize a pen that the writer threw out of the window out of frustration. The "desert heat" can symbolizes the strong emotion of frustration. In the third stanza, Collins talks about what makes writing complete and analogies were given. "The full moon makes sense". It makes "sense" because it is complete moon just as a sentence makes sense when it is "full" and complete. The "cloud" that "crossed" the full moon is like an obstacle that flaws the beauty of the moon and this can also create a haunting image. "When a cloud crosses it/it becomes as eloquent as a bicycle leaning outside a drugstore". The poet uses the adjective "eloquent" as mild irony because a "bicycle leaning outside a drugstore" is certainly not beautiful to most people. ...read more.

The "alphabet of boot prints" symbolizes the words that the writer has produced. These "alphabet boot prints" are then left as a message for readers. The "hills" and "valleys" symbolizes the ups and downs or the difficulties of writing. In the last stanza, the traveler finally reaches the person "you" or the reader and the man expresses his thought, or his completed written work. Collins uses the connotation, "vine" to describe smoke like thin, tangled fumes. This smoke could have been used as a signal that guided the traveler to his destination, or the writer's conclusion. The "man" can now smile because he can express his "complete thought" or the writer's finished work. Collins has made his point about the perseverance of writers and what are the key components of good writing. All great literature work begins with a sentence, and every sentence needs nouns, verbs, adjectives, and pronouns. The whole poem is dedicated to those meticulous poets that are willing to "travel through a storm" in order to express their complete thought in a poem. ?? ?? ?? ?? ...read more.