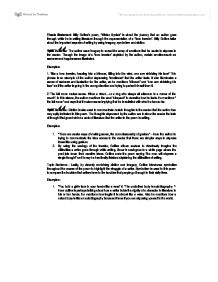 Thesis Statement: Billy Collins's poem, "Winter Syntax" is about the journey that an author goes through while he is writing literature through the representation of a "lone traveler". Billy Collins talks about the important aspects of writing by using imagery, symbolism and diction. Topic Sentence: The author uses imagery to reveal the array of emotions that he wants to express to the reader. Through the image of a "lone traveler" depicted by the author, certain emotions such as sadness and happiness are illustrated. Examples: 1. "like a lone traveler, heading into a blizzard, tilting into the wind, one arm shielding his face"- This phrase is an example of the author expressing "loneliness" that the writer feels. ...read more.

He mentions " the full moon" and says that it makes sense implying that he is satisfied with what he has so far. Topic Sentence : Diction is also used to communicate certain thoughts to the reader that the author has very aptly indicated in this poem. The thoughts expressed by the author are to show the reader the train of thought that goes behind a work of literature that the writer in the poem is writing. Examples: 1. "There are easier ways of making sense, the connoisseurship of gesture" - Here the author is trying to communicate the idea across to the reader that there are simpler ways to express ideas like using gesture. ...read more.

Topic Sentence : Lastly, by cleverly combining diction and imagery, Collins introduces symbolism throughout the course of the poem to highlight the struggle of a writer. Symbolism is used in this poem to compare the troubles that writers have to the troubles that people go through in their daily lives. Examples : 1. "You hold a girl's face in your hands like a vase" & "The unclothed body is autobiography. "- Here collins is perhaps talking about how a writer holds the dignity of a character in literature in his or her hands. He mentions how fragile it is almost like a vase. Also he mentions how a naked body is like an autobiography because it is as if you are exposing yourself to the world. ...read more.