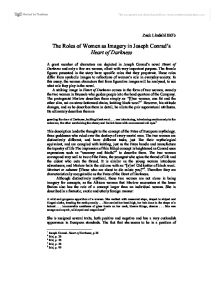 Women as figurative images in Joseph Conrad's Heart of Darkness

Zack Lindahl IB3b The Roles of Women as Imagery in Joseph Conrad's Heart of Darkness A great number of characters are depicted in Joseph Conrad's novel Heart of Darkness and only a few are women, albeit with very important purpose. The female figures presented in the story have specific roles that they perpetrate. These roles differ from symbolic images to reflections of women's role in everyday society. In this essay, the women characters that form figurative images will be analysed, to see what role they play in the novel. A striking image in Heart of Darkness comes in the form of two women, namely the two women in Brussels who guides people into the head quarters of the Company. The protagonist Marlow describes them simply as: "[t]wo women, one fat and the other slim, sat on straw-bottomed chairs, knitting black wool"1 However, his attitude changes, and as he describes them in detail, he allots the pair supernatural attributes. ...read more.

It is similar as the young woman introduces adventurers, and Marlow hails the old one with an "[a]ve! Old knitter of black wool. Morituri te salutant [Those who are about to die salute you]"4. Therefore they are characteristically recognizable as the Fates of the Heart of Darkness. Although distinctively mythical, these two women are not alone in being imagery for concepts, as the African woman that Marlow encounters at the Inner Station also has the role of a concept larger than an individual woman. She is described in a fantastic, exotic and utterly foreign manner: A wild and gorgeous apparition of a woman. She walked with measured steps, draped in striped and fringed cloths, treading the earth proudly . . . She carried her head high, her hair done in the shape of a helmet . ...read more.

This coupled with her appearance, makes her seem like a personification of Africa. The fact that she is a woman makes her akin to any spiritual Mother Goddess which is prevalent in many ancient religions, as well as the modern nationalistic trend to present a woman as symbolic for a nation. The African woman is therefore a personification of the African nation, which is also so completely alien to European culture, that it presents the ultimate experience of the Other. The knitting pair in Brussels and the African woman are representations of mythological and spiritual concepts. The knitting women are the Fate divinities, and therefore the Fates of the Heart of Darkness. The African woman is a personification for the African nation, in its exotic and alienated state. Conrad show this to the reader by using subtle description as hints and creating parallels between the mythical figures and their literal counterparts. In conclusion, the role of these women is as representations of mythical figures. ...read more.