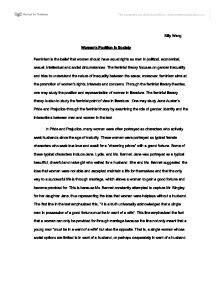 Womens Position in Society in P&amp;P

Billy Wang Women's Position in Society Feminism is the belief that women should have equal rights as men in political, economical, sexual, intellectual and social circumstances. The feminist theory focuses on gender inequality and tries to understand the nature of inequality between the sexes; moreover, feminism aims at the promotion of women's rights, interests and concerns. Through the feminist literary theories, one may study the position and representation of women in literature. The feminist literary theory is also to study the feminist point of view in literature. One may study Jane Austen's Pride and Prejudice through the feminist theory by examining the role of gender, identity and the interactions between men and women in the text. In Pride and Prejudice, many women were often portrayed as characters who actively seek husbands since the age of maturity. These women were portrayed as typical female characters who seek true love and await for a "charming prince" with a grand fortune. Some of these typical characters include Jane, Lydia, and Ms. Bennet. Jane was portrayed as a typical beautiful, cheerful and naive girl who waited for a husband. She and Ms. Bennet suggested the idea that women were not able and excepted maintain a life for themselves and that the only way to a successful life is through marriage, which allows a woman to gain a good fortune and become provided for. ...read more.

An unmarried woman was doomed to the unhappy life of a maid. And the understanding of this concept with the understanding of the position of women in society was what brought Charlotte forward as a feminist. Charlotte's need for financial security brought her to the marriage with Mr. Collins, as stated by her in the following line. "I am not romantic, you know. I never was. I ask only a comfortable home; and considering Mr. Collins's character, connections, and situation in life, I am convinced that my chances of happiness with him are as fair as most people can boast on entering the marriage state". Here, Charlotte showed a great amount of sensibility and responsibility, she can be considered sensible and realistic because of her choice to marry Mr. Collins. She understood the position of women in society and the necessity for a husband and considering the " connections, and situation" of Mr. Collins, she agreed to marry him. Not for love, but instead for security. Not only did Charlotte's understanding of her position as a woman in society make her a feminist, but also her attempts to gain power also made her a feminist. Because Charlotte understood the position of women in society, she married Mr. Collins. However, even though knowing that she was inferior to Mr. ...read more.

Collins. This was because she eloped without marriage, meaning that she no longer had the values as a woman. Her value was reduced and thus, she was seen as a "damaged good". That was the main reason for the marriage between Lydia and Mr. Wickham. In the final analysis, the position, role and identity of women can be analyzed in Pride and Prejudice through the feminist theory. An unmarried woman's ability to provide for themselves was very limited and the only method to a successful and happy life was through marriage. Women were seen as objects that were to be obtained in order to bear a child, they were not seen as people by men and thus were seen as objects. And they each carried a value based on their appearances and reputations. The feminists who understands the role of women and tries to improve their own position in society include characters like Elizabeth and Charlotte. Although Elizabeth did not appear to be a feminist at the starting of the book, as she was irresponsible and was somewhat similar to Jane. However, her character developed through the story and she became more sensible. Both she and Charlotte tried to find their own identity in society and went against the norms of society in order to find equality. They, especially Elizabeth tries everything within her power to present herself as a person and not a object to society. ...read more.