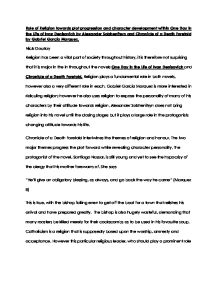 Role of Religion towards plot progression and character development within One Day in the Life of Ivan Denisovich by Alexander Solzhenitsyn and Chronicle of a Death Foretold by Gabriel Garcia Marquez. Nick Gourlay Religion has been a vital part of society throughout history, it is therefore not surprising that it is major in the in throughout the novels One Day in the Life of Ivan Denisovich and Chronicle of a Death Foretold. Religion plays a fundamental role in both novels, however also a very different role in each. Gabriel Garcia Marquez is more interested in ridiculing religion; however he also uses religion to expose the personality of many of his characters by their attitude towards religion. Alexander Solzhenitsyn does not bring religion into his novel until the closing stages but it plays a large role in the protagonists changing attitude towards his life. Chronicle of a Death Foretold intertwines the themes of religion and honour. The two major themes progress the plot forward while revealing character personality. The protagonist of the novel, Santiago Nassar, is still young and yet to see the hypocrisy of the clergy that his mother forewarns of. She says "He'll give an obligatory blessing, as always, and go back the way he came" (Marquez 8) ...read more.

He believes this because it is a murder required to protect the honour of a family, it must go forth. This is the general attitude of the town, in which so many of them know of the murder yet so few take action. Marquez asks the question, how a town with such a strong religious culture can turn their backs on a murder of this sort. Religion in the town is more of an obligation than a choice; this attitude even extends to the bishop. However this obligation in the end leads to the death of Santiago Nassar and it must be pondered whether without the strong religious background of the town and the fear of not going to heaven would this murder of occurred? One Day in the life of Ivan Denisovich does not contain religion throughout like Chronicle of a Death Foretold, however when religion comes to the fore in the novel it leads to a very important progression of Shukhov's character. The majority of the religious material comes towards the end of the novel after Shukhov has had a "good day" in his prison camp. He begins to discuss the concept of religion with the Baptist Alyoshka. ...read more.

However it also has a profound effect on the protagonist, Ivan Denisovich. Shukhov, who has remained sceptical of religion throughout his prison life and even his life, however he has been changed by the wise words of Alyoshka, and this is key to the novel. Religion has changed the way the protagonist sees the world. The closing lines of the novel show that Shukhov has become a more positive person and this can partly be put down to the conversation with Alyoshka. The two authors have portrayed and used religion very differently within their novels; one shows the negatives of religious obligation and the outcomes of such a lifestyle while the other shows a much more positive outlook towards religion, portraying it as a means of survival when times are tough. However what is common between Marquez and Solzhenitsyn is that both comment on the hypocrisy of religion. Marquez has used religion and honour to drive the plot of his novel and expose the weaknesses of many characters, where as Solzhenitsyn has used religion to show the strengths of character and a positive change within the protagonist. Religion plays a key but contrasting role within the novels; Marquez sets out to satirize the religious structure of Latin America where as Solzhenitsyn comments that religion can be an important role of anyone's life. Word Count: 1239 ...read more.