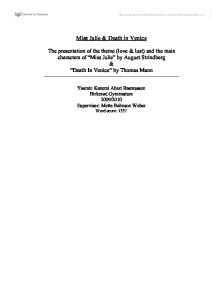 She realizes what her lust for him has made her do, she will now become dishonored by her dad and everyone around her. Jean disrespects her, even though he was the one who just slept with her, and Miss Julie doesn't know what to do with herself? Julie: Help me, help me! Tell me only what I am to do - where I am to turn? Jean: O lord, if only I knew myself! Julie: I have been exasperated, I have been mad, but there ought to be some way of saving myself. Jean: Stay right here and keep quiet, Nobody knows anything. Julie: Impossible! The people know, and Christine knows. Jean: They don't know, and they would never believe it possible. Julie: (hesitating) But - it might happen again. 2 This dialogue is a clear example of their relationship, Miss Julie seemed confident in the start, but because of her developing feelings for Jean she becomes insecure, and starts to ask Jean what do to. The play ends with Miss Julie following Jean's advice and committing suicide, so she would not have to confront her mistakes. She looses all her power, and nobility by sleeping with the servant. In the end it is obvious to observe that Miss Julie simply just wanted a man that could take care of her, and her lusts took over her common sense. ...read more.

Aschenbach knows himself that what he is doing, and thinking is wrong. His fascination for the boy has taken over his common sense. He does not approach Tadzio but he follows him around Venice, and he dreams about him, and discovers his sexual lusts. One afternoon he goes to the lobby and finds out that the Polish family is leaving, then even in his ill condition he goes to the beach to watch Tadzio for the last time. Tadzio is standing unsupervised by the beach and looking out at the water, he looks back at his admirer, Aschenbach tries to get up but falls back in his chair and dies. Miss Julie was written in 1888, and Death in Venice was written in 1912. There are not many similarities between the authors, and the styles these two stories were written in. Yet they do have similar themes and similar characters. Lust and love, was what drove both main characters to act differently, and controversial to what they are use to. They both die because of there actions, which were made because of their desires. Both the stories are tragedies but expressed in very different ways, one through a play another through a novel. Miss Julie and Gustav Von Aschenbach have both suffered, suffered what they normally would believe was a good thing, love. It was forbidden love and lust. ...read more.