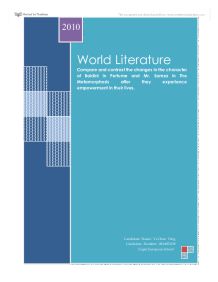 World Literature: Compare and contrast the changes in the character of Baldini in Perfume and Mr. Samsa in The Metamorphosis after they experience empowerment in their lives.

Compare and contrast the changes in the character of Baldini in Perfume and Mr. Samsa in The Metamorphosis after they experience empowerment in their lives. Empowerment is when one increases his capability and status within family and career. Often the great satisfaction stemming from empowerment lead those who experience it to become complacent, especially towards those who once held more distinctive positions. This is especially evident the character development of Baldini and Mr. Samsa in Perfume and The Metamorphosis. In Perfume, Baldini is an unoriginal perfumer whose fame is surpassed by the talented P�lissier. On the other hand, Mr. Samsa from The Metamorphosis is an unemployed man who relies on his son, Gregor to support the family financially; that is, before Gregor's incredible transformation. These two characters are both feeble and insignificant in the beginning. However, after they become accomplished and experience empowerment, they begin to belittle those previously more successful than them through their actions and thoughts. Yet despite the similar transformations, the authors have different intentions because Baldini and Mr. Samsa have opposite endings in the story - one dies and the other prospers. ...read more.

He also "as a sign of joy only lifted up his arms"[pg28, lines 2~3], and this illustrates his perpetual exhaustion. Yet after Gregor becomes disabled and Mr. Samsa becomes the family's backbone, Mr. Samsa is no longer weary all the time. In fact, he becomes alert, as "he was holding himself very erect" [pg28, line 10] and "his black eyes darted bright, piercing glances" [pg 35, lines 14~15]when he prepares to punish Gregor. Kafka carefully uses language here to illustrate Mr. Samsa's newly-acquired confidence and vitality. For example, "darted" and "piercing" suggest energy and alertness, something he clearly lacked before. His eyes are "bright", and this portrays Mr. Samsa as shrewd and vigilant. Furthermore, Mr. Samsa's hair has "a scrupulously exact, gleaming part" [pg28, line 15]. "Gleaming" serves a similar effect as "bright", and this reemphasizes Mr. Samsa's newly-acquired energy and acuity. He is now a scrupulous and strict father, something in complete contrast with his former self. Evidently, Mr. Samsa has transformed from a feeble to a confident and strong-minded character due to his taste of empowerment. Mr. Samsa also seems to no longer care for his son after his transformation, as he does not hesitate to punish Gregor for frightening Mrs. ...read more.

By examining the authors' intentions in Perfume and The Metamorphosis, Baldini's and Mr. Samsa's changes do not seem as similar below the surface. In conclusion, Baldini and Mr. Samsa experience seemingly almost identical changes in their characters when they acquire power and rank. Their confidence and ego increase, and as a result they begin to disparage others through their thoughts and actions. They transform from enervated and sickly characters to healthy and confident ones. Yet they have each metamorphosed this way for contrasting reasons; through Mr. Samsa's prosperous end, Kafka reflects the shadow his domineering father had casted on him. In contrast, through Baldini's unexpected and swift death S�skind conveys his disapproval of the character development Baldini undergoes. Thus, it can be concluded that within the stories Baldini and Mr. Samsa both undergo almost identical development to a great extent. But this similarity ceases somewhat when the authors' intentions and historical backgrounds are closely examined. The editions of the texts used to support this essay are: Perfume - Penguin Fiction Edition The Metamorphosis - Translated and Edited by Stanley Corngold - A Norton Critical Edition. WORD COUNT: 1444 1. Daniel Kornek. (2005). Franz Kafka's letter to his father.Available: http://www.kafka-franz.com/KAFKA-letter.htm. Last accessed 17 May 2009. ?? ?? ?? ?? Candidate Name: Yi-Chun Teng Candidate Number: 001407-038 ...read more.