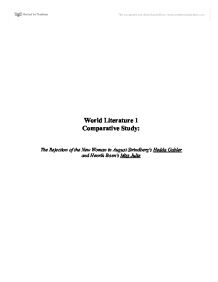 World Literature 1 Comparative Study: The Rejection of the New Woman in August Strindberg's Hedda Gabler and Henrik Ibsen's Miss Julie 'New Woman' was a term used in the late nineteenth century to describe women who challenged the limits imposed upon them by a patriarchal society. The New Woman challenged these limits in an attempt to achieve self-fulfillment and independence (Willis and Richardson 79). It was common for the New Women's actions to be considered scandalous, because they did not follow conventional expectations of women of the time. In the plays Hedda Gabler by Henrik Ibsen and Miss Julie by August Strindberg, both playwrights convey the message that there is no place for the New Woman in patriarchal societies through the protagonists, Hedda Gabler and Miss Julie. They ultimately commit suicide due to social scandals, resulting from flaunting their sexuality, manipulating people and a decline in their morality. Hedda has the qualities of a New Woman, which make her become more open about her sexuality. In Hedda Gabler, male characters are attracted to Hedda. For instance, Judge Brack (Hedda's long-time friend) wants to have an affair with Hedda and even tells her to "jump out" (Ibsen 252) of her marriage. Although Hedda rejects Brack's request to have an affair, she does engage in flirtation with him. She teases Brack with sexual comments, referring to him as the "cock of the walk" (Ibsen 282). ...read more.

Hedda thinks the only way to achieve independence is to gain power, and that individuals gain no power unless they manipulate the group. So, she attempts to manipulate characters like L�vborg and Mrs. Elvsted. L�vborg and Mrs. Elvsted have a special relationship because Mrs. Elvsted is helping L�vborg with his manuscript. Hedda thinks that Mrs. Elvsted "has had her fingers in a man's destiny" (Ibsen 263). This bothers Hedda, so she decides to ruin their relationship by burning L�vborg's manuscript because she wants to have the same power over L�vborg that Mrs.Elvsted has. The loss of L�vborg's manuscript leaves him vulnerable and without a will to live. Hedda also encourages L�vborg to commit suicide by handing him her pistol. She thinks that death is the only way to be free and wants to experience freedom vicariously through his suicide. Despite all of Hedda's efforts, Brack finds out what Hedda did to manipulate L�vborg and Mrs. Elvsted and indirectly blackmails her into having sexual intercourse. Hedda does not like the fact that somebody, especially a man, has control over her: "All the same, I'm in your power. Tied to your will and desire. Not free. Not free, then! No---I can't bear the thought of it. Never!" (Ibsen 302). Like Hedda, Julie tries to be in control and gain independence through the manipulation of others. Julie, as the daughter of a Count, does not have much freedom because of her social status. ...read more.

She gets very upset and says some harsh words about wanting Jean's head on the chopping block. This shows that she is malicious and brutal, especially for a woman from a noble family. As New Women, both Hedda and Julie demonstrate their declining morality in Strindberg's and Ibsen's plays. They both reveal their immorality by flaunting their sexuality and manipulating others in an effort to gain power. Strindberg and Ibsen both portray Hedda Gabler and Miss Julie as having the qualities of a New Woman, and convey the message that a New Woman cannot endure patriarchal society because of the public scandal that arises from her controversial actions. They demonstrate how Hedda and Julie's open sexuality, manipulation of men and their declining morality thrust them into the spotlight of public scandal; however, neither woman can handle this. Both Hedda and Julie commit suicide to escape the scandal of their own actions. Hedda kills herself after Brack threatens to reveal what she did to L�vborg . For her, this is the only way to escape and be free from public scandal. Similarly, Julie finds herself in the spotlight after having sex with Jean. Afraid of the consequences, she asks Jean to order her to commit suicide and kills herself to escape. Through Hedda and Julie's deaths, Strindberg and Ibsen both establish the idea that it is inevitable for a New Woman to become involved in a public scandal, and her inability to accept this means she cannot survive in a patriarchal society. ...read more.