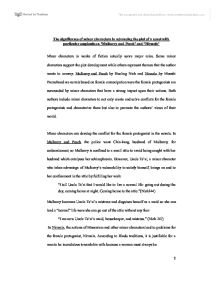 The significance of minor characters in advancing the plot of a novel with particular emphasis on 'Mulberry and Peach' and 'Nirmala' Minor characters in works of fiction actually serve major roles. Some minor characters support the plot development while others represent themes that the author wants to convey. Mulberry and Peach by Hualing Nieh and Nirmala by Munshi Premchand are novels based on female emancipation were the female protagonists are surrounded by minor characters that have a strong impact upon their actions. Both authors include minor characters to not only create and solve conflicts for the female protagonists and characterize them but also to promote the authors' views of their world. Minor characters can develop the conflict for the female protagonist in the novels. In Mulberry and Peach, the police want Chia-kang, husband of Mulberry, for embezzlement, so Mulberry is confined to a small attic to avoid being caught with her husband which catalyses her schizophrenia. However, Uncle Ts'ai, a minor character who takes advantage of Mulberry's vulnerability to satisfy himself, brings an end to her confinement in the attic by fulfilling her wish: "I tell Uncle Ts'ai that I would like to live a normal life: going out during the day, coming home at night. Coming home to the attic."(Nieh144) Mulberry becomes Uncle Ts'ai's mistress and disguises herself as a maid so she can lead a "normal" life were she can go out of the attic without any fear: "I am now Uncle Ts'ai's maid, housekeeper, and mistress." ...read more.

I let your father have Phoenix so I could keep him under my control." (Nieh 86) Her possessiveness towards her husband and son is immense that she kills her husband's concubine, bores an illegitimate son and comments negatively about her son to regain control over them. Thus, because two important women in Mulberry's life crave for power and dictate the men in any way possible, Mulberry herself yearns for dominance over men which she achieves through sexual intercourse. Also, through these minor characters, Nieh conveys the message that women want to acquire command over men even it sabotages their characters like Aunt Shen who acts disgracefully to achieve power. Like Nieh, Premchand's novel contains minor characters that impact the female protagonist's characterization. Because of Munshiji's inability to work after the loss of his son, Nirmala is forced to be frugal which makes her look evil in the eyes of her sister-in-law and step-sons. And, as a result of Munshiji becoming weak and guilty for his son's death, Nirmala is able to have unrestrained authority over her husband and the other characters that further damages her reputation. Nieh and Premchand depict that female characters gain control over men when the men are frail, in a way that is sometimes considered unjust by other characters. Thus, both authors communicate their view that women are able to attain supremacy over the weakened men though the society scrutinizes and denounces their actions. ...read more.

Also, by naming the traditional man as "old man" without providing a specific name, the "old" signifies the traditions as ideas of the past. Likewise, Premchand includes minor characters to portray the changing attitudes of women in India during that time. An Indian woman is: "nothing without the man...must never dare to have a will of her own...A wife is to be considered as a mere maternal machine and domestic drudge" (Padfield 47) Clearly women held a low status in the Indian society and had to be dependent on men. However, in the novel, the transformation in the reaction of the female characters' to their husband's death signals the shift in the view of Indian women. In the beginning of his novel, Kalyani regrets arguing with her husband which partially leads to his death, though it is his irresponsibility that causes the brawl and his fatality. However, later, when Doctor Sahib suddenly dies because he attempts to have an affair with Nirmala for which Sudha, his wife, confronts him, Sudha is not guilty because she feels he deserves it. It is apparent that Sudha is more confident than than Kalyani of her impeccability over her husband's death and courageous to lead life without her husband. Though minor characters occur only in small portions of the novels, they play significant roles in the plot development and promotion of themes. Thus, without minor characters, authors will have difficulty devising a plot and ways to communicate their views. They are like pillars of a building without which the building will collapse. ...read more.