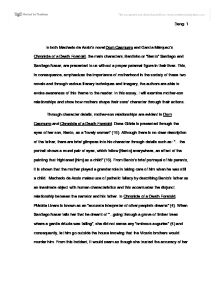 In both Machado de Assis's novel Dom Casmurro and Garc�a M�rquez's Chronicle of a Death Foretold, the main characters, Bentinho or "Bento" Santiago and Santiago Nasar, are presented to us without a proper paternal figure in their lives. This, in consequence, emphasizes the importance of motherhood in the society of these two novels and through various literary techniques and imagery, the authors are able to evoke awareness of this theme to the reader. In this essay, I will examine mother-son relationships and show how mothers shape their sons' character through their actions. Through character details, mother-son relationships are evident in Dom Casmurro and Chronicle of a Death Foretold. Dona Gl�ria is presented through the eyes of her son, Bento, as a "lovely woman" (16). Although there is no clear description of the father, there are brief glimpses into his character through details such as: "... the portrait shows a round pair of eyes, which follow [Bento] everywhere, an effect of the painting that frightened [him] as a child" (16). From Bento's brief portrayal of his parents, it is shown that the mother played a grander role in taking care of him when he was still a child. Machado de Assis makes use of pathetic fallacy by describing Bento's father as an inanimate object with human characteristics and this accentuates the disjunct relationship between the narrator and his father. ...read more.

After Capitu marries Bento, she undergoes a significant character transformation, becoming less strong-willed and independent. She assumes a more "traditional" role as a wife and mother. When she is bombarded with accusations by her husband, she simply replies: "I am at your disposal" (233). Her distress is a signal to the reader that she may not be prepared for motherhood and although she tries to suppress this inner secret from Bento, he finds out from Ezequiel's imitations of his mother. This is blatant through Bento's description: "Capitu playing with her son, and her with her, or each with the other, for, in truth, they were fond of each other..." (220-221). He even states that "Ezequiel's eyes came from his mother" (221) and this signifies that Ezequiel's character is heavily shaped by Capitu because of their close resemblance. Nonetheless, the reader must keep in mind that the relationship between Capitu and her son is filtered through the lens of the narrator and therefore, could prove to be misleading to a certain extent. All these factors can, however, explain why Bento is suspicious of his wife and his "supposed" son; especially, after he starts to speculate that Escobar may be the actual father of Ezequiel. Garc�a M�rquez employs a similar, but slightly different approach in conveying the influence of mothers on their sons' character. ...read more.

However, he describes, fleetingly, that this slight thought caused him great anguish which eventually led to a burst of tears. It is important to note that this thought is enigmatic as the narrator admits that he would "go against [his] mother's orders" (86) in order to see Capitu. Nonetheless, filial love is evident throughout the novel as he consistently tries to please his mother after rejecting the seminary. Although Bento stated that he loved Capitu more than his mother, he visited Dona Gl�ria's house one more time "to say goodbye" (225) while leaving his wife in Switzerland. This unexpected occurrence symbolizes the impact of motherhood in Bento's life and his reciprocity for all Dona Gl�ria has done for him. Without the presence of a true father, mothers play a special role in providing discipline, love, and characteristics to their sons in both Dom Casmurro and Chronicle of a Death Foretold. Personality traits, character development, as well as inner thoughts and motivations can be revealed by mother-son relationships. The presence of solely a mother, however, results in a lack of experience or guidance in which is evident in her son. Santiago Nasar's languid response to his murder and Bentinho's hostility towards Capitu can all be explained by the treatment of their mothers. This theme, as well as many other literary techniques Machado de Assis and Garc�a M�rquez employ, helps create the distinct realities of these novels. ...read more.