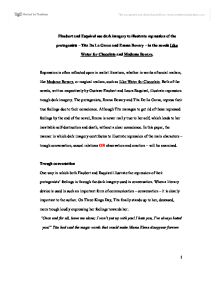 Flaubert and Esquivel use dark imagery to illustrate repression of the protagonists - Tita De La Garza and Emma Bovary - in the novels Like Water for Chocolate and Madame Bovary. Repression is often reflected upon in realist literature, whether in works of social realism, like Madame Bovary, or magical realism, such as Like Water for Chocolate. Both of the novels, written respectively by Gustave Flaubert and Laura Esquivel, illustrate repression trough dark imagery. The protagonists, Emma Bovary and Tita De La Garza, repress their true feelings due to their conscience. Although Tita manages to get rid of these repressed feelings by the end of the novel, Emma is never really true to her self, which leads to her inevitable self-destruction and death, without a clear conscience. In this paper, the manner in which dark imagery contributes to illustrate repression of the main characters - trough conversation, sexual relations OR observation and emotion - will be examined. Trough conversation One way in which both Flaubert and Esquivel illustrate the repression of their protagonists' feelings is through the dark imagery used in conversation. ...read more.

When Esquivel is talking about the "ghost of the dead", she is really referring to Tita's repressed feelings. The citation "dead and still walking" illustrates the fact that Tita's feelings for Pedro are "dead" - from her repressing them - but "still walking" - from still being in her consciousness. This dark imagery also illustrates how Tita repressing her feelings are "deadly": in magic realism - as we see further into the novel - this is very likely to be absolutely true. Trough emotions As the youngest daughter in the De La Garza family, Tita is destined to a fate of loneliness: she must, until her mother dies, take care of her and remain unwed. When Pedro, Tita's sweetheart, decides to marry her sister Rosaura - Tita suddenly feels cold and empty: She realized that the hollow sensation was not hunger but an icy feeling of grief. She had to get rid of that terrible sensation of cold. [...] Not that night, nor many others, for as long as she lived, could she free herself from that cold.5 The deliberate juxtaposition of "hollow sensation" and "icy feeling of grief" emphasize the seriousness of Tita's emotions. ...read more.