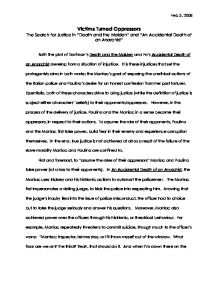 Victims Turned Oppressors The Search for Justice in "Death and the Maiden" and "An Accidental Death of an Anarchist" Both the plot of Dorfman's Death and the Maiden and Fo's Accidental Death of an Anarchist develop from a situation of injustice. It is these injustices that set the protaganists aims in both works; the Maniac's goal of exposing the unethical actions of the Italian police and Paulina's desire for an honest confession from her past torturer. Essentially, both of these characters strive to bring justice (while the definition of justice is subject either characters' beliefs) to their opponents/oppressors. However, in the process of the delivery of justice, Paulina and the Maniac in a sense become their oppressors, in respect to their actions. To assume the role of their opponents, Paulina and the Maniac first take power, build fear in their enemy and experience corruption themselves. In the end, true justice is not achieved at all as a result of the failure of the slave morality Maniac and Paulina are confined to. First and foremost, to "assume the roles of their oppressors" Maniac and Paulina take power (at a loss to their opponents). In An Accidental Death of an Anarchist, the Maniac uses trickery and his histrionic actions to outsmart the policemen. The Maniac first impersonates a visiting judge, to trick the police into respecting him. ...read more.

The Italian police instilled fear in opposition groups by infiltrating them with secret officers as well as through the unexplained deaths which were a regular occurrence to suspects at the police headquarters. In Death and the Maiden, Dr. Miranda's entire torture operation was built around the idea of fear, specifically the victim's fear of further pain. However, Paulina and Maniac use fear tactics also during their attempt to bring justice to their former oppressors. Maniac attempts to instil fear in the police officers by reminding them that the potential results of his inquiry could be a national scandal that would disgrace the police: "Scandal is the fertilizer of social democracy ... people can let of steam, get angry, shudder at the thought of it ... and they get more and more angry, and then, BURP! A little liberatory burp to relieve their social indigestion."(Fo, 202). Fearing a potential loss of position or forced resignation, the police officers try their best to cover up their misconduct, which leads to greater errors on behalf of the police (though much to the Maniac's enjoyment). Paulina continues her aggression and threats of violence to build fear in Miranda- fear for his life. His fear keeps him compliant and forces him to do things he would not have done if her were in a position of liberty, namely provide the confession- an item necessary for Paulina's desired justice. ...read more.

Paulina's vindictiveness for the masters is demonstrated in this extract: "Out there you bastards may still give the orders, but in here, for now, I'm in command." (Dorfman, 21). However, Nietzsche notes that the slave's attempt to bring justice to the masters by taking power always fails because their motives are based on a desire for revenge. Based on this, Paulina's supposed achievement of justice for her oppressor was a failure, or at least not true justice for the reasons of employing the same unethical means as her oppressor to force out a confession and basing her quest for justice on a revengeful and vindictive attitude she held towards Miranda. She might have begun her stage of self-healing, but she did so without bringing true justice to her oppressor. In the case of Maniac, he himself knew that a public police scandal would never change anything and never saw a change in the actions of the police thanks to his "accidental" death. Clearly the desired justice was never served in his case either, and for the same reasons that were behind the failure of Paulina's attempt at justice. In many respects, these results most likely face all victims-turned masters as they are often consumed by revenge or just end up repeating the same actions of their oppressors, thus continuing the cycle of injustice. Word Count: 1,411 ?? ?? ?? ?? Feb 5, 2008 ...read more.