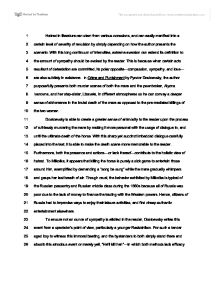 Hatred in literature can stem from various occasions, and can easily manifest into a certain level of severity of revulsion by simply depending on how the author presents the scenario. With this long continuum of intensities, extreme aversion can extend its definition to the amount of sympathy should be evoked by the reader. This is because when certain acts resultant of detestation are committed, its polar opposite-compassion, sympathy, and love-are also subtlety in existence. In Crime and Punishment by Fyodor Dostoevsky, the author purposefully presents both murder scenes of both the mare and the pawnbroker, Alyona Ivanovna, and her step-sister, Lizaveta, in different atmospheres so he can convey a deeper sense of abhorrence in the brutal death of the mare as opposed to the pre-mediated killings of the two women. Dostoevsky is able to create a greater sense of animosity to the reader upon the process of ruthlessly murdering the mare by making it more personal with the usage of dialogue to, and until the ultimate death of the horse. With this sharp yet succinct imbedded dialogue carefully placed into the text, it is able to make the death scene more memorable to the reader. ...read more.

Also, by the reader not being familiar with the character of Milkolka as opposed to Raskolikov, one cannot sympathize with the reasoning-if any-of killing an innocent mare that was his own "property" besides the fact that he was drunk and just desired some shape of "fun" that would attract a crowd, thus making him and his object of torture the center of attention. Dostoevsky does contribute an atmosphere of scorn as Raskolikov murders Alyona and Lizaveta, but to a lesser severity in comparison to the killing of the mare. He is able to create a contrasting effect by not including personal dialogue as Alyona is murdered, and repeats the absence of conversation even during the course of reluctantly killing Lizaveta. However, with this lack of dialogue and this occurrence written from the murderer's point of view-Raskolnikov-it depicts his internal dialogue and thinking process that makes the reader feel more attached to Rodya, thus inducing understanding from the reader. By Dostoevsky writing the killings in this manner, the reader can automatically sense the hesitation that Rodya displays up until the moments he passively hits Alyona with the blunt side of the axe. ...read more.

Petersburg. Therefore, Rodya felt that he could potentially save many lives with her money, and could save her sister from such a miserable life that Listavesta exhibited. Since the majority of people in St. Petersburg felt the same way as Rodya did, as illustrated by the conversation Rodya overhead between an officer and his acquaintance, Rodya felt that this was his chance to encompass his "humanitarian" view he idolized, and take it one step further. He wanted to transform from being an "ordinary" man-men who leisurely go by day to day abiding by society's laws-into an "extraordinary" man-a man who has the authentic capability of breaking laws only if they desire to benefit society. For this reason, Rodya felt as if he was conducting a catharsis on society by eliminating the one person he felt that everyone despised due to her unkind and unethical actions. Though both scenes involve the death of a living creature, Dostoevsky is able to educe a greater sense of abhorrence towards Milokla then towards Raskoliknov by primarily attaching the reader to Rodya more than Milkolka, and by insinuating a justification for the death of Alyona as opposed to the innocent mare. It is with these methods that give the reader the ability to have sympathy for Rodya that ultimately carries throughout the remainder of the novel. ...read more.