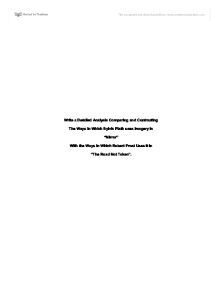 Write a Detailed Analysis Comparing and Contrasting The Ways in Which Sylvia Plath uses imagery in &quot;Mirror&quot; With the Ways in Which Robert Frost Uses it in &quot;The Road Not Taken&quot;.

Write a Detailed Analysis Comparing and Contrasting The Ways in Which Sylvia Plath uses imagery in "Mirror" With the Ways in Which Robert Frost Uses it in "The Road Not Taken". In poems "Mirror" and "The Road Not Taken" by Sylvia Plath and Robert Frost respectively, the authors extensively make use of images to convey to the audience the feelings of the characters and the flow of events. In her poem, Plath uses the voice of a mirror that sees the world without any prejudices and misconceptions. The author uses a visual imagery when describing the mirror as being "silver" to show that the surface of the mirror is smooth and clear and reflects the true image of the one in front of it. In line five of the first stanza the poet also uses a metaphor comparing the mirror "to an eye of a little God", that sees everything, but has no power to change ones life. ...read more.

In her poem, Sylvia Plath uses images to describe the nature of the mirror that reflects the outside world exactly and truthfully. The author forms an image of a mirror that does not necessarily possess the ability to affect ones life and can do nothing but show the truth of life and how it changes, even though sooner or later it will lead one to emptiness. The second poem "The Road Not Taken" by Robert Frost clearly describes how the changes in life affect ones life and his death. Frost, in his poem, underlines the importance and influence of the decisions that one makes on his life. The author describes a two roads that diverge, leading the person in one or another direction. This theme also present in the image of a fig tree that the hero of Sylvia Plath's novel Esther Greenwood has when faced with a dilemma of deciding on her future life. ...read more.

This image conveys to the reader that both of the roads are full in mysteries as leaves have covered them from the speaker's eyes. This also links with the first poem, as one constantly faces the changes and difficulties in life that are unknown to him beforehand. In the last stanza, the speaker refers to the road that he chose as the one less traveled by. The author here might be referring to himself as to why he chose to become a poet instead of taking the first road that many others preferred. This situation also links with the concept of life, which is also relevant in the first poem. Both Sylvia Plath and Robert Frost use imagery to create a vivid image of the speaker and his surroundings. Plath uses images to describe the role and the characteristics of the mirror, when Frost describes the roads that fork in front of the speaker. The two poems are closely linked with the theme of life with its ever changing flow, surprises, mysteries and its inevitable end. ...read more.