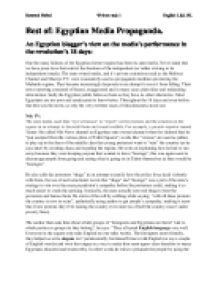 Best of: Egyptian Media Propaganda. An Egyptian blogger's view on the media's performance in the revolution's 18 days: One the many failures of the Egyptian former regime has been its state media. Never mind that we have press laws that restrict the freedom of the independent (or rather striving to be independent) media. The state owned media, and it's private extensions such as the Mehwar Channel and Masriya TV, were consistently used as propaganda machines promoting the Mubarak regime. They became increasingly desperate in an attempt to save it from falling. Their news reporting consisted of biased, exaggerated and in many cases plain false and misleading information. Sadly the Egyptian public believes them as they have no other alternative. Most Egyptians are too poor and uneducated to know better. Throughout the 18 days and even before that this was the norm, so only the very extreme cases of ridiculousness stood out. Nile TV: The state media used fake "eye witnesses" to "report" on the protests and the situation in the square in an attempt to discredit them and sound credible. ...read more.

and twist his tongue in a way to make him seem upper class therefore to many Egyptians educated and trustworthy. In other words he tries to persuade the people by using the sound of educated speakers. This is ethos, except he tries to get the public's trust when he isn't trustworthy.1 Mehwar TV: Who can forget the beautiful Shaimaa, who we couldn't really see for her own "safety" of course. She told us about her "paid trips to the US", the words "paid" "trips" and "US" in one sentence were the key words to get the negative attention of any average Egyptian. This interview took place on the 9th 2 days before the fall of the regime, where people have been told for 2 weeks everyday that the protesters are foreigners or Egyptians that took training in "other countries" like the "US", "Qatar", "Iran" and "Israel" (the four countries that don't agree on a single thing suddenly all united) to train people like her "on how to topple regimes" these sentences had very negative connotations as the channels made it clear that these countries where conspiring against Egypt by saying "such ...read more.

We're at a crucial point where we need to question everything, until we live in a democratic, just country with honest media. Word count: 999 Rationale: My written task is a blogpost about the Egyptian media's propaganda during the first 18 days of the revolution. It is an analysis of how the media used language as a propaganda machine in order to manipulate what the people do and not do which relates directly to language and power, as they completely excluded the revolutionaries point of view as well as directly lied most of the time. I chose this topic as it is intriguing and I saw this the most suitable way of writing it in because it also symbolizes how the revolutionary chose to go to uncensored media and not use the "Press/ Newspaper" as it would censor out things. In conclusion I see that my task fulfilled the requirements in a very suitable maner. 1 All quotes are translations except for the bolded words within the text. ?? ?? ?? ?? Rowand Helmi Written task 1 English L&L HL ...read more.