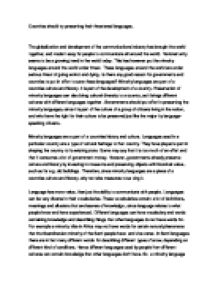 Hence different languages used by people from different cultures can contain knowledge that other languages don't have. So a minority language can bear knowledge within it that a nations dominant language does not. Having this new knowledge could benefit a nation. It could broaden the way people think, as language and the vocabulary are factors that affect the way we think, because we tend to think in the same language that we use. It could develop and broaden peoples understanding of things, for e.g. the Scandinavian countries could gain a better understanding of snow from the Sami languages. Variety of languages can give a broaden understanding of the world, since languages originate from different types of cultures. Languages have very different modes of expression and different vocabularies to each other. Hence bilingualism can, not just bring knowledge, but also promote creativity in a society, because the varying types of expression and vocabulary between different languages can function as a stimulus to creativity and new kind of thinking. Preserving a minority language would bring two, in many ways, different cultures together, which in itself would bring creativity to a nation, for e.g. ...read more.

Therefore help should be available quickly and easily, without any complications regarding language. The minority languages should be taken to consideration by governments, as minorities deserve the same attention and care as all the other citizens of the country. Preserving the language could also unify a nation and avoid conflict between the majority and the minorities, because the minority people would feel more welcome in their country, and not like outcasts. Preserving a language in itself has benefits, like creating a creative and innovative atmosphere, which can be very beneficial to the country. Minority cultures have often also had an affect on the majority culture of a nation, so why let part of your own culture die away. Minority languages should not just be swept aside. Even though preserving a language consumes government money, the governments should take measures to preserving them, as they are a significant part of the nation. The nations should keep these languages alive and take all the benefit of having such a diverse culture and variety of language, as a nation can learn and gain a lot of knowledge and creativity, from their minorities by being able to communicate with their language. ...read more.