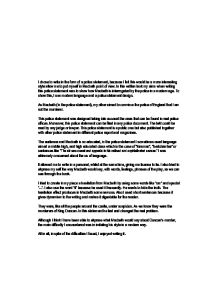 This statement, consisting of 2 pages signed by me, is true to the best of my knowledge and belief and I make it knowing that, if it is tendered in evidence, I shall be liable to prosecution if I have stated in it anything which I know to be false or do not believe to be true.1 Crime being investigated: King Duncan's murder. 2th October 08 Thane of Cowdor (Macbeth). I am a former battle hardened soldier. I met Duncan personally at the King's palace when he thanks me for the part I played in the battle, I was his worthiest kinsman. Then he named me Thane of Cowdor, I was very proud. After that exciting moment he decides to go to my castle at Inverness. I could not say no to that offer he made me. Once we decide what to do, I send a messenger quickly to Inverness. ...read more.

We went, what was there made us freeze with horror. It was Duncan, he was dead. Covered in blood as well as his pillows and clothes. Duncan's guards were covered in blood too, but not dead so it makes me think that they were the prime suspects. Immediately the bell was rung. My wife, who was ... I think ... awakened by the alarm, came in. The nobles went in to see the king's body. We had to give the terrible news to Malcolm and Donalbain. The violent rage inspired by my love for Duncan caused me to act before I could think rationally and tell myself to pause. I killed the king's attendants. We agree to dress quickly and meet in the castle hall. For my surprise the two princes had left the country. This makes them suspicious. Witnesses claim they saw Malcolm riding his horse as fast as lightning towards England and Donalbain went in another path on his way to Ireland. This cannot be, how could someone kill our own king, our noble king? 1Adopted from http://www.injustice.org/nemo/witness/p046-050.html ?? ?? ?? ?? ...read more.