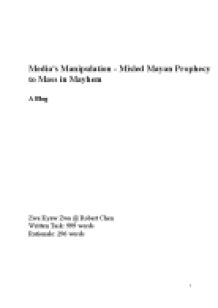 ﻿Media's Manipulation - Misled Mayan Prophecy to Mass in Mayhem A Blog Zwe Kyaw Zwa @ Robert Chen Written Task: 999 words Rationale: 296 words ________________ ________________ A couple of days ago on 21/12/12, I wouldn't have dared to post this blog. Everyone was in a frenzy about how the world is going to end and whether they should just pack up to leave Earth or jump off a skyscraper. No one would be in state of such haphazardness but for exposure to the sole culprit of all "breaking news" - the media. Let's take a brief backward stroll into the timeline. First came the print media when people got access to international news worldwide through newspapers. Then, appeared the television through which they could watch live shows and news. Finally, the arrival of the Internet sped up this communication process to even greater heights. However, the entire purpose of the media seems to have changed a long time ago. News articles are more stories now, thus, the word, 'news-stories,' rather than sources of information. ...read more.

Has it? Even NASA and every government confirmed there won't be a catastrophe on the so-called 'doomsday.' Then, why won't people just calm down and relax instead of scampering about in search of shelter and food? The answer is the television. All these years of exposure to films on how officials and experts are depicted as tricksters has initiated an 'expertophobia' in everyone. The media has shifted people's attention from the 'experts-with-scientific-proof' to 'experts-in-lying.' I believe we all still remember the 2009's epic science-fiction movie, '2012.' Note the word 'fiction.' Yet, everyone failed to accept or even notice the camera tricks: the astounding sound effects, the sensational and shocking imagery and the dramatic, yet, thrilling chain of events of the broadcast media, nailed a larger impact on men than any newspaper account had. I can still recollect Jackson Curtis's 'expertophobia' when he yelled, "When they say don't panic, that's when you start running!" I can't solely blame Director Ronald Emmerich for his fraud 2012 phenomenon. It's for entertainment after all, but, one inflated to extremity. One just cannot differentiate reality from fantasy. ...read more.

In fact, this oracle has metamorphosed the initial 'knower-AND-teller-of-everything' to the 'knower-of-everything-BUT-teller-of-something-else!' In other words, these headlines online: "Tickets for Underground Bunker Rising to $1000" and "End of World Confirmed" are nothing but hyperbole and bluff. And, do people buy this stuff? YES THEY DO! And, at the expense of their time and money. Last week was a disaster...since everyone's buying and hoarding provisions away for survival, the food price nearly doubled! I could merely afford 2 meals a day. There were riots and governors' speeches regarding this absurdity. People ought to see shame branded on their faces when the time arrived and nothing at all happened. And, does the media care for this? No way. Right now, I am sure every newspaper organization or film producer is preparing to breed another hot-doomsday-issue to scare the wits out of people. The same business has been dealt with for the end of the world predictions in 1666 or more recently, at Y2K. People never learn. They trust the media just as they have faith in God. Using this example of the Mayan Prophecy, I want to raise awareness among people. Can we still trust the media for information? To what extent is it still reliable? ...read more.