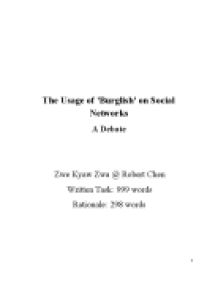 Written Task: The Usage of Burglish on Social Networks

﻿The Usage of 'Burglish' on Social Networks A Debate Zwe Kyaw Zwa @ Robert Chen Written Task: 999 words Rationale: 298 words Rationale The introduction of the English language to Myanmar has transformed many monolinguals in the country to bilinguals. However, the dominance of English, the world's top lingua franca,[1] over Burmese, a vernacular of Myanmar, has raised serious concerns regarding a declining fluency among youth in use of the mother language and hence, the loss of cultural heritage. People are becoming alarmed about what they consider as an improper usage of English and Burmese by Burmese teens on the Internet. Multilinguals, through code-switching, have transformed the Internet into a source that invents new vocabulary or even whole new languages.[2] 'Burglish,' a blend of Burmese and English, is one of these languages. 'Burglish' emerges from the utilization of English phonetics to spell Burmese pronunciations. This hybrid language has become a significant form of communication between Burmese speakers, and together with the social influence it has on people, an online community of 'Burglish' users is established. However, the practice of 'Burglish' gives rise to controversial issues concerning the purpose of its usage. Is this hybrid language a sign of innovation or stagnation, that of resiliency or incompetence? ...read more.

Facebook, Twitter, My Space, and many other social networks have come to be an integral part of their lives. Therefore, the language which they adopt while socializing in this massive, yet intimate, community is having a major impact on their linguistic skills. What I have discovered, to my dismay, is that young Burmese people have employed code-switching to? John: Mike, code-switching is definitely not going to reduce their language proficiency. In fact, according to Professor Jack Chambers of sociolinguists at the University of Toronto, code-switching is disapproved of by some native English speakers but not by language experts.[5] Though some may find it embarrassing, in reality, it is perfectly normal and linguistically fascinating. Moreover, code- switching allows an individual to express emotions that cannot be conveyed as well in English. Mike: Don?t jump to conclusions, John. Yes, code-switching can be ?linguistically fascinating? but, only to some extent. In this case, people have bastardized English as well as Burmese by blending to create an Internet argot so-called ?Burglish.? John: Renovation is more probable rather than deformation and, 'Burglish' is not an argot; it is a whole new language! Mike: It is hardly a language?just a straggly form of communication derived from English. Even if it is one, it?s corrupted! ...read more.

It?s a mutual benefit! Mike: Be it advantageous or not, do people have the right to mold English into strange shapes, deviated from the original? John: Divergence? Why not? This is possible if English is transferred onto foreign soil. Take other examples like Singlish, Hinglish and Chinglish. All these hybrid languages stemmed from English and are accepted as lingua franca in certain communities. The same goes for 'Burglish'. Oh and here?s the brutal truth. The article, ?English grows into strange shapes when transplanted into foreign soil,? states that rather than regard English as a uniquely British invention to be defended, the British should see themselves as just one of many shareholders in a global asset. The reason is that English, itself, has been derived from numerous other languages including Latin, Scandinavian and Norman-French. Mike: Hmm? John: So, my conclusion would be that adopting 'Burglish' is a clear evidence of novelty and pliability, the resolution to the apprehension of English dominating over Burmese in this day and age. ________________ [1] Richard Nordquist, Grammar & Composition, Lingua: English as a Lingua Franca, <http://grammar.about.com/od/il/g/linguafrancaterm.htm> [2] Glenn Roberts Jr., Internet Users Breed A Strange New Language: Technology Newcomers Struggle with Lingo, May need to get a Translator, 18th August 2012, <http://www.netlingo.com/press/article-4.php> [3] British rule in Burma, 4th February 2013, <http://en.wikipedia.org/wiki/British_rule_in_Burma> [4] elk38, Burmese Language At Cornell, 30th July 2012, <http://lrc.cornell.edu/asian/courses/burmese> [5] Deena Kamel, A language without limits, 19th August 2008 <http://www.thestar.com/news/gta/2008/08/19/a_language_without_limits.html> ...read more.