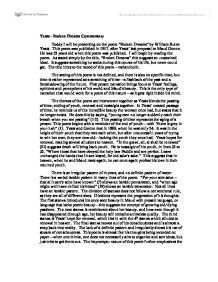 Yeats - Broken Dreams Commentary Today I will be presenting on the poem "Broken Dreams" by William Butler Yeats. This poem was published in 1917, after Yeats' last proposal to Maud Gonne. He was 52 years old when this poem was published. I will begin by reading the poem. As stated simply by the title, "Broken Dreams" this suggests an unattained ideal. It suggests something he seeks during this course of his life, but never could get. The title hints to the mood of this poem-melancholic. The setting of this poem is not defined, and there is also no specific time, but time is rather represented as a stretching of time-a flashback of the past and a foreshadowing of the future. First person narration brings focus to Yeats' feelings, opinions and perceptions of his world and Maud's beauty. This is the only type of narration that would work for a poem of this nature-as it gets right inside his mind. ...read more.

shows an iambic tetrameter. Not all lines have an iambic pattern. The division of stanzas does not follow a conventional rule, as they are all of different sizes. Divisions represent the progression of his thoughts. The first stanza introduces his once-seen beauty in Maud with prosaic language, or language that lacks poetic beauty-this suggests the concept of growing old/dying passions. The next stanza is reminiscent about her beauty, and how even though it has disappeared through age, her beauty still remains a timeless quality. The third stanza is Yeats' hope for renewal, which ties in with the 4th stanza which alludes to renewal in heaven. The final stanza moves out of his consciousness and is almost a snap back into reality. The lack of a definite pattern and irregularity shows his use of stream of consciousness. This poem is almost like his thoughts being recorded on paper-when one thinks, one does not necessarily aim to organize and sort ideas, but just tries to get them out. ...read more.

Heaven appears to be a state that is free of suffering, and lacks the sense of self. Here, youth returns and Yeats is hopeful to finally reencounter his perfect vision of Maud. There are also many instances of alliteration such as ... , these all put emphasis on a word. For example, "burdensome beauty" almost says that beauty is In the final stanza, Yeats appears to move out of his consciousness back into reality to realize the many memories he has thought of. Line 40, "in rambling talk with an image of air" suggests that he has been talking to himself in much the same rambling nature of the poem itself. If I were to shape a rhetorical or emotional curve for this poem, it would start off flat, like the prosaic/monotone language, and the old age, but it would move up higher as he "becomes" more youthful and feels more hopeful, then it would drop back down by the last stanza. Talk about strange pace of time. End off with Maud's confrontation, "If I had returned those feeling , the world would have been deprived of his beautiful poetry" ...read more.