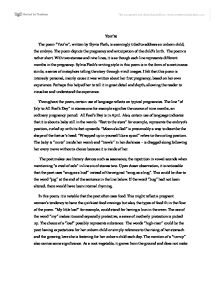 You're The poem "You're", written by Slyvia Plath, is seemingly titled to address an unborn child, the embryo. The poem depicts the pregnancy and anticipation of the child's birth. The poem is rather short. With two stanzas and nine lines, it is as though each line represents different months in the pregnancy. Sylvia Plath's writing style in this poem is in the form of a continuous simile, a series of metaphors telling the story through vivid images. I felt that this poem is intensely personal, mainly cause it was written about her first pregnancy, based on her own experience. Perhaps this helped her to tell it in great detail and depth, allowing the reader to visualize and understand the experience. Throughout the poem, certain use of language reflects on typical pregnancies. The line "of July to All Fool's Day" in stanza one for example signifies the course of nine months, an ordinary pregnancy period. All Fool's Day is in April. Also, certain use of language indicates that it is about a baby still in the womb. ...read more.

"My little loaf" for example, could stand for having a bun in the oven. The use of the word "my" makes it sound especially protective, a sense of motherly protection is picked up. The choice of a "loaf" possibly represents substance. The words "high-riser" could be the poet having expectations for her unborn child or simply reference to the rising of her stomach and the growing love she is fostering for her unborn child each day. The mention of a "turnip" also carries some significance. As a root vegetable, it grows from the ground and does not make a sound. At least, none that is audible to our human ears. Hence, the embryo is similar in this way as it is silent inside the mother's womb. "Jumpy as a Mexican Bean" probably refers to how the baby would start kicking from the inside causing her stomach to jump. Furthermore, in addition to the mentioning of edible plants, there is also the constant use of sea creatures. The simile "gilled like a fish" is probably used because neither babies nor fish breathe through lungs. ...read more.

"Vague as a fog and looked for like mail" shows the feeling of excitement. Perhaps it even explains everyone else's feeling as well, the popularity of the unborn child. "Farther off than Australia," because the foetus has yet to appear and hence, can't be seen. "Bent-backed Atlas" symbolizes the greek legend in which the giant named Atlas, holds up the sky on his back. Again, the poet could be referring to the posture of the embryo inside the womb. It is quite apparent that the poet greatly anticipates the birth of her baby, with high hopes for the baby's future. "Right, like a well-done sum" shows how the baby is seen as perfection right from the very beginning. It also suggests that perhaps the baby is almost ready to be born. The final line, "a clean slate, with your own face on", signifies the poet's opportunity to start a fresh as a mother. It could also refer to the baby, having the appearance that would resemble its parents yet pure and untainted, the picture of innocence. Overall, the poet makes use of various visual imagery to allow the reader to step into her shows and visualize as well as understand her perception of her own pregnancy. ...read more.