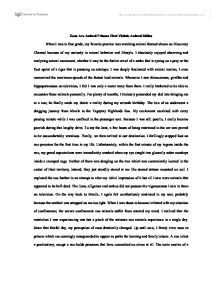 Zoos Are Animal Prisons That Violate Animal Ethics. The main motive of a proprietor in building a zoo is to establish a business that would generate him money. Unfortunately, this business involves the exploitation of animals.

Zoos Are Animal Prisons That Violate Animal Ethics When I was in first grade, my favorite pastime was watching animal-themed shows on Discovery Channel because of my curiosity in animal behavior and lifestyle. I absolutely enjoyed observing and analyzing animal movement, whether it may be the furtive crawl of a snake that is eyeing on a prey or the fleet sprint of a tiger that is pursuing an antelope. I was deeply fascinated with animal motion; I even memorized the maximum speeds of the fastest land animals. Whenever I saw rhinoceroses, giraffes and hippopotamuses on television, I felt I was only a meter away from them. I really hankered to be able to encounter these animals personally. For plenty of months, I tirelessly persuaded my dad into bringing me to a zoo; he finally made my desire a reality during my seventh birthday. The two of us underwent a dragging journey from Manila to the Tagaytay Highlands Zoo. My excitement escalated with every passing minute while I was confined in the passenger seat. Because I was still puerile, I easily became peevish during that lengthy drive. ...read more.

As far as history brings us, man has hunted and trapped animals and made them his playthings and servants (Mann 1). Confined space imposes preposterous limits to animals and robs them of their freedom. Zoo animals are kept in enclosures that prohibit them from performing basic animal activities such as running, wandering and socializing. The vicinity of the zoo, no matter how much land is allotted to it, can never be made comparable to the natural habitat which animals were meant to live in. Zoo-makers cannot completely replicate animal environments such as jungles and deserts. Zoo animals, in contrast to animals in the wild, face restrictions in every imaginable aspect. One of the worst prohibitions a zoo imposes to its inhabitants is the disallowance of natural selection of a mate. Moreover, animals that are solitarily kept in cages, especially large animals such as elephants and carnivorous felines, are inclined to develop catastrophic behavior. Out of the restlessness accumulated by an animal from all the years of its confinement, an animal would often become demented and uncontrollably violent as it ages. In Z�rich Zoo in Switzerland, a male polar bear broke through the bars which separated him from a female polar bear and eventually killed the young cub (Hediger 45). ...read more.

The ongoing operation of zoos all over the world at present time is a universal demonstration of man's self-serving nature. It is rather na�ve to say that man is oblivious of the potential suffering experienced by zoo animals for it is easily manifest when one visits a zoo. Amid this awareness, man still finds it appropriate to cage animals because of academic purposes or worse, for personal and trivial reasons. Animal conservationists who dispute that zoos are the best sites for preservation of endangered species ought to know better that a zoo's environment is unbefitting to fully support the successful breeding of animals. If one's true agenda is conservation of animals, the concept of releasing animals back to the wild must always be deemed as the end result of keeping animals in captivity. Zoos are incompetent in priming animals to survive in wilderness. The thirst for animal-related knowledge of scientists and children alike can still be satisfied without the existence of zoos. The proper way of gaining information from animals is by observing them directly in their natural habitats. It is obvious that this alternative would not be able to cater to all animal enthusiasts for it would be perilous and costly, but it is simply cruel to cage innocent animals in zoos for any purpose at all. ...read more.