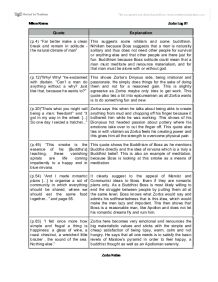 Quote Explanation (p.4) "Far better make a clean break and remain in solitude - the natural climate of man" This suggests some nihilism and some buddhism. Nihilism because Boss suggests that a man is naturally solitary and thus does not need other people for survival or anything else and that other people are there just for fun. Buddhism because Boss solitude could mean that a man must meditate and renounce materialism, and for that man must be alone with or without god. (p.12)"Why! Why! "he exclaimed with disdain. "Can't a man do anything without a why? Just like that, because he wants to?" This shows Zorba's Dinysus side, being irrational and passionate. He simply does things for the sake of doing them and not for a reasoned gain. This is slightly agressive as Zorba maybe only tries to get work. This quote also ties a bit into epicureanism as all Zorba wants is to do something fun and new. (p.20)"Thats what you might call being a man: freedom!" and "it got in my way in the wheel. [...] So one day I seized a hatchet..." Zorba says this when he talks about being able to create anything from mud and chopping off his finger because it bothered him while he was working. This shows of his Dionysus hot headed passion about pottery where his emotions take over to cut the finger off. ...read more.

However he considers it to be a man's natural state to be in solitude(p.5). The majority of the time through these chapters Zorba and Boss are in Crete. A Mediterranean island. They enjoy the sea and the beach. They are set amongst workers and women. This is the approach that they take towards most people there, men are workers for the lignite mine and women are desired and adored. On p.27, while they are still drifting along the shores Boss reflects "...a low grey hill without a tree, resembling the face of a woman resting. And beneath her chin, along her neck, ran the dark brown veins of lignite." This makes both the reader and Boss feel romantic towards Crete and welcome it as a new beginning with opportunities of business for Boss. Culturally they both come from a different place so they have to adapt to the cretan customs, that is why Boss says, "Mind you behave, now we're entering the village. [...] Cretans don't take things lightly." (p.29) Both have been to Crete previously, however Boss being the Apollonian is worried that Zorba will commit queer actions and give them a bad reputation. This adds a little pressure towards both and creates mental distance between the heroes and the cretans for the reader. As if to remind that that Zorba and Boss are not and never will be proper Cretans. ...read more.

As it is commonly known nicotine causes blood to flow more actively and engages a person to think more actively, forgetting about the sense for a while. Both wine and tobacco are substances that make people dizzy and different, usually more open. Zorba even uses wine to get to women, the obvious technique of getting the potential partner drunk and to loosen up himself. The final theme is freedom and happiness. This is what Boss mostly philosophizes about, especially when Zorba asks him rhetoric questions or tells stories that have bothered Zorba's own mind for long. Like on p.26 and p.27 when Zorba tells a story about a man who throws away all of his gold. This gives Boss an epiphany, or at least a different way of looking at things. Zorba is the main source of spiritual evolution in Boss. Literary Features Kazantzakis uses many personifications to portray attachment to something. Like in the example of the island being portrayed as a woman or on p.40 wine is said to have a devil inside it. He uses metaphors, especially when Zorba is speaking or Boss in thinking. For example on p. 40 there is a simple metaphor comparing kind words to love or gold. And that is very common in this passage to have these small metaphors that make the story easier to relate to and add a romantic tone when life is compared to a mediterranean occurrence. ?? ?? ?? ?? Mikus Krams Zorba Log #1 Mikus Krams Zorba Log #1 Zorba Notes Zorba Notes ...read more.