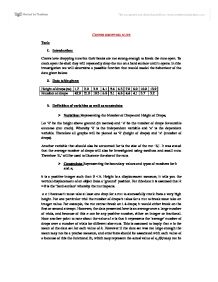 Crows love dropping nuts but their beaks are not strong enough to break the nuts open. To crack open the shell they will repeatedly drop the nut on a hard surface until it opens. In this investigation we will determine a possible function that would model the behaviour of the data given below.

Another variable that should also be accounted for is the size of the nut ‘Sn’. It was stated that the average number of drops will also be investigated using medium and small nuts. Therefore ‘Sn’ will be used to illustrate the size of the nuts.

h is a positive integer such that: 0 < h. Height is a displacement measure, it tells you the vertical displacement of an object from a ‘ground’ position. For this data it is assumed that h = 0 is the ‘hard surface’ whereby the nut impacts.

n ≥ 1 because it must take at least one drop for a nut to successfully crack from a very high height. For one particular trial the number of drops it takes for a nut to break must take an integer value. For example, the nut cannot break on 1.4 drops; it would either break on the first or second attempt.

Thus after having calculated the motion of the nut under constant acceleration, therefore it was also important to calculate the momentum of the nut, as this is the quantity that is conserved under an inelastic collision.  (Citation http://en.wikipedia.org/wiki/Momentum)

Hence knowing the velocity of the nut from the previous equation, the following was deduced;

Thus it was assumed that the impact of the nut will be proportional to the momentum,

However as the nut would bounce off the surface not all the force of the impact with the ground go into deforming the nut (breaking) (Citation http://en.wikipedia.org/wiki/Deformation).

Therefore another force is introduced,

represents the percentage of force that is absorbed by the nut on impact, and is why the notation

is chosen as it is the constant of deformation in this model. Hence the range is:

The following is a representation of the formula used to calculate the impact of the nut, whereby,

reflects the force of impact. Therefore by substituting the previous expression for momentum (

) into the formula for ‘deformation of the nut’. The next step was to calculate the required number of drops for the nut to crack.

will be substituted for

in the equation below,

It is evident that a nut will break when it is exposed to enough impact force. There will be a threshold were after sufficient impact force the shell cannot contain the energy caused by impact and will fracture to conserve energy.

For each drop the nut will get weaker (i.e. more deformation to its atomic/molecular lattice). Hence the following equation is a representation of the number of impacts,

It can be assumed through the results above that so long as the data being collected maintains an accurate curve with minimal variation; the reciprocal power function will fit the data quiet accurately. However if there was variation within the data as found in the small nut, hence the equation will not correctly fit the data.  However in the first equation (reciprocal function) it was proven that the model was not an accurate fit to the data. Whereby the curve of the data resulted in having a negative value. Hence the equation needed to be modified for a better fitEven though after modifying the data and forcing a horizontal asymptote to better fit the data points it appeared that the model still did not fit the data accurately, and hence the equation needed to be changed.However if all the parameters were modified as shown in the graphs above it appeared that the equation fits the data quiet well. However this equation has many limitations. If the curve of a particular data (other than the ones investigated) had a steeper slope thus the equation would not obtain an accurate fit. Moreso if there was more data calculated, thus it would be safe to assume that the equation after a certain amount of time would completely miss the data, because it apparent that the curve is constantly descending, thus after a specific period of time the curve will cross into the negative value. Whereby the equation has reached its utmost limit.
...read more.