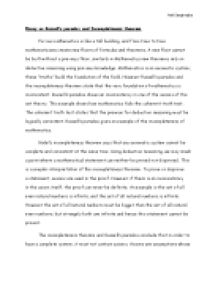 Generally, mathematics obeys the axioms and has no inconsistencies. I fail to understand the practical purpose of these irregularities within the system. On a philosophical level it proves that like other areas of knowledge Mathematics is indefinite and we can never know the completeness of the system. However using simple mathematics, we can still perform our daily tasks, and still perform calculations strong enough to help us send a rover to Mars. I believe that even if the axioms are wrong, the inconsistency is repeated throughout the system and hence there is still validity to Mathematics. Having a system that avoids self referencing and axioms, will make Mathematics an area only for the scholars and not common people, as it will be difficult to understand for the masses. -490 words ...read more.