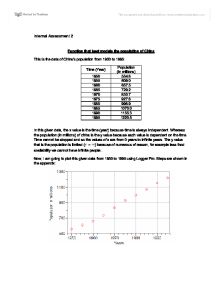 Function that best models the population of China. Some of the functions that I think that could model this data were linear function () and exponential function ().

Function that best models the population of China

In this given data, the x value is the time (year) because time is always independent. Whereas the population (in millions) of china is the y value because each value is dependent on the time. Time cannot be stopped and so the values of x are from 0 years to infinite years. The y value that is the population is limited (

) because of numerous of reason, for example less food availability we cannot have infinite people..

Now, I am going to plot this given data from 1950 to 1995 using Logger Pro. Steps are shown in the appendix: 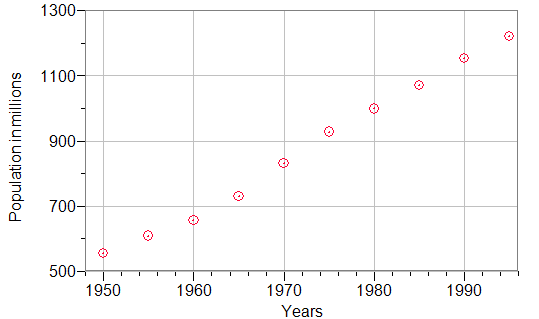 The reason why there is not a line connecting all the points is that because it might be possible that in 1951 or 1969 or in another period there could have been a rapid growth or decline in the population. That is why it is not continuous but discrete.

Out of all this, I decided to choose

This model is the best fit to the data. But as we can see that some of the points are quite off. From above this is the best that I could see.

A researcher suggests that the population,

can be modelled by

This is a logistic equation and the parameters in this equation each have a special role to perform:

In order to check it, I will use my TI-84 Plus. Method is shown in the appendix. I will find the parameters of the researcher`s model first and then graph it with my calculator. This is what my TI-84 Plus showed me:

Now I will use this new equation to graph again with my TI-84 Plus. Method is shown in the appendix: 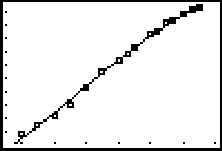 As we can see that the graph from my TI-84 Plus matches the graph that I got with the help of Logger Pro. This new modified version of the model fits the data from 1950 to 2008 fits very well as it almost goes through each point. Also there is no big jump in this particular graph. The graph almost looks like it is easily making its way up.

Also, this researcher’s model is not always going to work. If there are earthquakes or natural disasters the population will decline. Also it will take time to get back in track. Declining of population is possible but not so common. For example,

The graph will not be able to cover all the points. In short, other graphs should also be used because this graph will not always work, for example when the population actually starts declining.