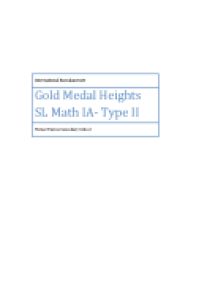 This report will investigate the winning heights of high jump gold medalists in the Olympics. The Olympics composed of several events evaluating physical strength of humans. Every Olympic game brings different numerical value for a height that a person can jump, allowing for different data collection. First of all, the data ranging from the years 1932 to 1980 will be portrayed on a graph for observation. From thorough investigation, the best curvature or line that fits the trend of the data will be selected to represent the relation. The function will be algebraically approached using the numerical values of the data points. Through the use of technology, the parameters will be plugged in to illustrate that function electronically. The function will be observed and any limitations with the model will be indicated. The function might need refinement according to any outliers/ anomalies, also to better represent the trend. The model function and a given function by the programme will be compared. Since the Olympics were not held during the years 1940 and 1944 due to WWII, this function will help determine the possible outcomes of the gold medal heights during those years. Also, a prediction of the years 1984 and futuristic year 2016 will be made according to the function created manually. Furthermore, the range of data will be extended to evaluate the effectiveness of the created function for extrapolated points. Analysis of the extrapolated points will be discussed with special reference of significant fluctuations. Lastly, the

figure 1 and will be used in this investigation.

Creating an equation for the Sinusoidal Function

The general equation for the function is f (x) = a sin (bx – c) +d, where each variable impacts the appearance of the function in different way. The parameters of the sinusoidal function in the equation are a, b, c, and d. The a effects the amplitude also knows as vertical stretch/compression which is calculated by finding the midpoint between the max and min. The b value affects the horizontal stretch/compression which is calculated by two times pi all over k. The k represents the period which is the distance between two successive maximum points or minimum points. The c value affects the horizontal shift which is calculated after knowing all over variables then solving for c. Lastly, the d value represents the vertical shift, which can be calculated by finding the average point of heights.

The year with lowest height is 1932, and highest height is 1980. Therefore, multiplying the difference by two will give the distance of one cycle (between two successive max and/or min).

Sub in value of k

This will not be converted to degree in order to maintain exact value.

Sub in all known variables

Take a value of any point and plug it into the equation and solve for c, the decision was taking (1960, 216) since it’s in centre of the values gives.

Model of the algebraic derived function

Modifications can be made to the algebraic model function based on the first set to data to best fit the additional data as well. The amplitude needs to be increased to adjust with fluctuation in wide range of heights that are achieved by gold medalists. There also needs to be a significant change in the period because the maximum and minimums are located much further apart with the additional set of data, thus requiring a greater horizontal stretch. Afterwards, a horizontal shift will remain relatively the same as equal amount of Olympic Games have been added before and after the original set of data. The vertical shift will be reduced by a little because the previous set of data from 1932 is much less in heights than the increase in height after the year 1980. Therefore the average of the vertical height will drop allowing for a smaller vertical shift. Through these modifications the new function would represent the addition data much more accurately.

This investigation has contributed in further understanding the detailed curvature of various functions and using it to model data. The functions have several parameters which affect it in various ways, either horizontally or vertically. I have learned how to algebraically approach in creating a function to model specific set of data. Upon deriving an algebraic function, I compared it to a regression model using computer software which helped me learn the similarities and differences of different methods in approaching a best fit model. I learned how to interpolate and extrapolate using a derived function and was able to evaluate its accuracy by making connecting with the trend of the data. Lastly, I learned that a model function my not adjust with addition data. This occurs because the derived function was solely based on the first set of data and new parameters would need to be set for additional data. Overall, many previous concepts were revived and new ideas were learned from conducting this investigation.