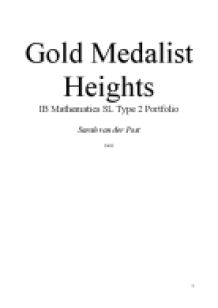 The Olympic Games is a major event occurring every 4 years. International athletes come together to represent their country at a sport, first place winning a gold medal.  This portfolio aims to consider the trends of the winning men gold medalist’s high jump heights at various Olympic Games.

The table below gives the height achieved by the men gold medalist’s high jumpers at various Olympic Games between 1932 and 1980.

Using excel, a graph has been produced to represent this data visually.

Unfortunately, there are parameters to this graph.

In order to make calculations easier, I created a graph of height versus years since 1932 as seen in graph 2. When considering the trends and possible functions this graph models, I immediately thought that the function that models the behaviour of this graph is a linear function. This can be shown by the line of best fit in Graph 3 which is linear, where the line goes through point which allows the same number of points to be above and below the line.

Graph 3: The winning heights of Olympic Games against years since 1932 showing linear line of best fit.

By using the coordinates of two points whom this best fit line passes through (E and G), the equation of the line of best fit was found.

I have graphed this analytically found equation with the line of best fit in order to compare.

Graph 10: Graph of winning height against year of Olympic Games (between 1896 and 2008) showing cubic function.

However the model curves upward before the year 1896 and curves downward after the year 2008 which disagrees with the trends of the data. Therefore we can assume the cubic can only be used for data between 1986 and 2008.

Considering this limitation, I sought to find another model which could fit the data and came across the Gaussian model. The Gaussian model begins with a level and horizontal line and then curves up similar to the cubic model. It also models the leveling off as the years approach 2008. But, like the cubic model slopes downwards after the 2008. It is a better representation of the data than the cubic model since it does not slope upwards in the years before 1896. Their winning height would never have begun at 0 because naturally humans can jump a certain height. Thus this level beginning fits well.

Graph 11: Graph of winning height against year of Olympic Games (between 1896 and 2008) showing Gaussian function.

To conclude, it is very hard to find a model which fit exactly the trends of the data from Olympic Games, but this investigation has found that the Gaussian model is the model which models the data most.