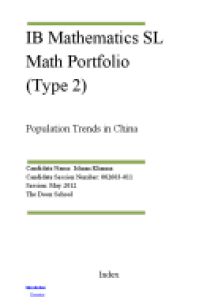 Modelling the population of China

The aim in this portfolio is to study the different functions that best model the Chinese population from 1950 to 1995.

The following table shows the population of China between 1950 and 1995:

The significant variables in this analysis are ‘x’ and ‘y’. The variable ‘x’ is for the different years from 1950 to 1995 with 1950 as 0. The population in millions is represented by the variable ‘y’.

I will now use the rref() function on my TI-84 to solve the matrix and get a single equation:

On pressing I receive:

Therefore the equation I get is:

The Graph below shows the equation (the red line is the data set):

Since the equation I developed is not representing the data set well enough (Graph 5) I will use the cubic equation I had got earlier via technology.

A researcher suggests that

This is a logistic function where K,L and M  are the parameters.

Using Logger Pro, I input the equation and use the ‘Best Fit’ function. I receive:

The graph of the equation is shown below:

In graph 7 I will compare the researcher’s function against the original data:

As we can see the researcher’s model does not fit the data as well as the cubic function.

I will now see what the 2 models predict the future populations will be:

As we can see, the cubic model (graph 7) is declining which is not possible for a country’s population. Thus the cubic equation cannot be relied upon.  The Researcher’s model (graph 8) shows exponential growth which is more realistic.

I will now compare the two models with the new information I have received and see how well they have predicted the values.

The new equation is:

According to me  is the best function to forecast China’s population.