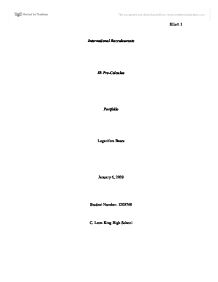 IB Pre-Calculus Logarithm Bases General Information: Logarithms A logarithm is an exponent and can be described as the exponent needed to produce a certain number.

Consecutively you should get 3, 2, and 1.2. Now convert 1.2 into the fraction of 6/5. From this you can notice that 6 is made when multiplying 3 and 2, and 5 is made when adding 3 and 2. Now try another sequence. From sequence 3, plug in ln 125/ ln (1/5), ln 125/ ln (1/125), and ln 125/ ln (1/625) all separately. You should get -3, -1, and -.75 respectively. Now lets try the formula of cd/ c+d. when plugged in you should get, (-3 * -1)/ (-3 + -1), which is reduced to 3/ -4, which is equal to -.75. This proves the statement to be valid. With formulas comes a limitation. However it seems as though this one lacks a limit in terms of a, b and x. It seems this formula of cd/c+d is only useful when trying to find the calculation of a logarithm using its roots. By splitting up a logarithm into two smaller ones, you can find its solution easier by using the formula. This can be helpful when used in certain situations; however it can be useless when unneeded in smaller logarithms. In terms of a, b and x, x must repeat in order to use this expression. To find the general statement of cd/ c+d, was by reverse solution. I found the answer of the third term and tried to find out how this answer could be derived by using the values calculated from the first two terms. Word count: 1475 ?? ?? ?? ?? Elliott 1 ...read more.