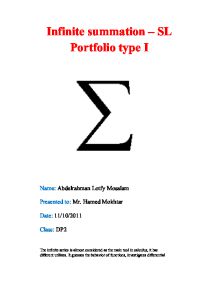 Infinite summation SL Portfolio type I. Concerning the portfolio, the evaluation is composed on the sum of the series 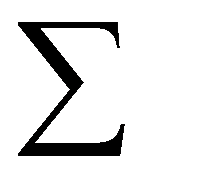 The infinite series is almost considered as the main tool in calculus, it has different utilizes. It guesses the behavior of functions, investigates differential equations and also it's used in numerical analysis. Beside these uses in math, the infinite series may be used in physics and economics as well.

Concerning the portfolio, the evaluation is composed on the sum of the series 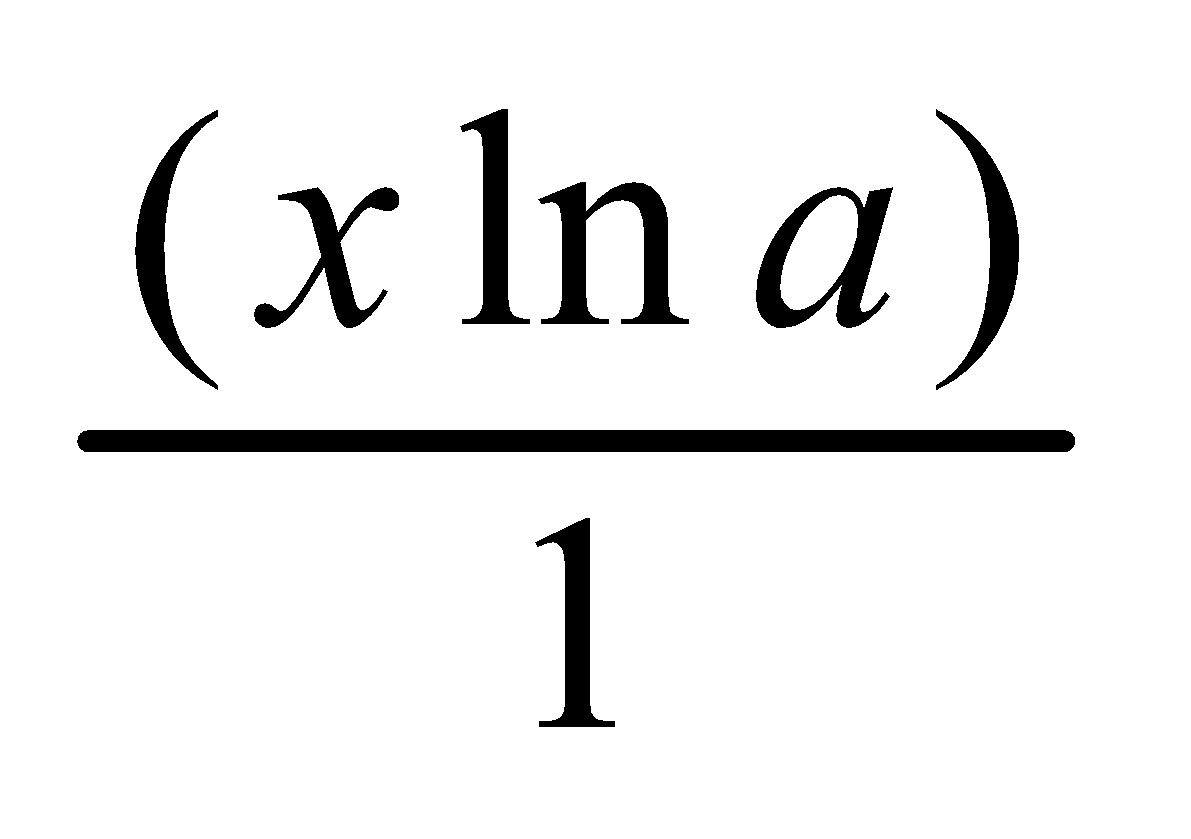 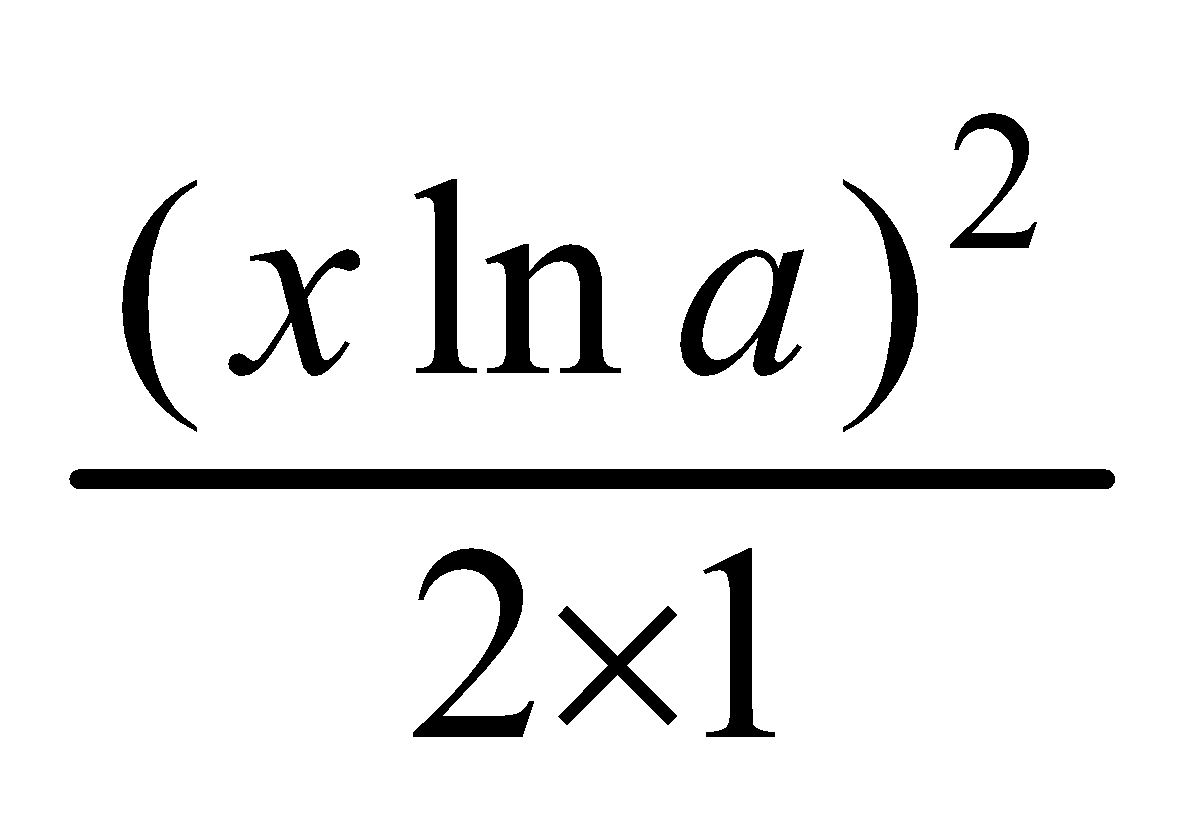 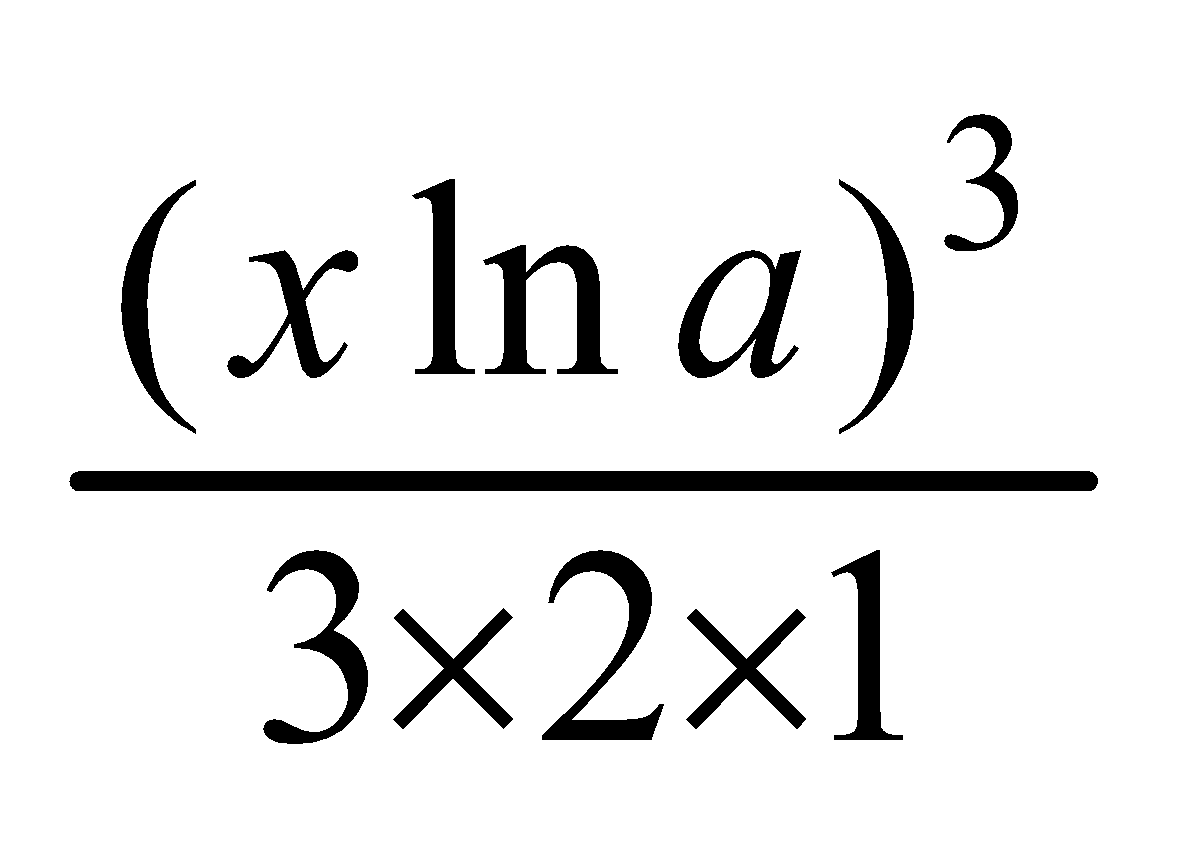 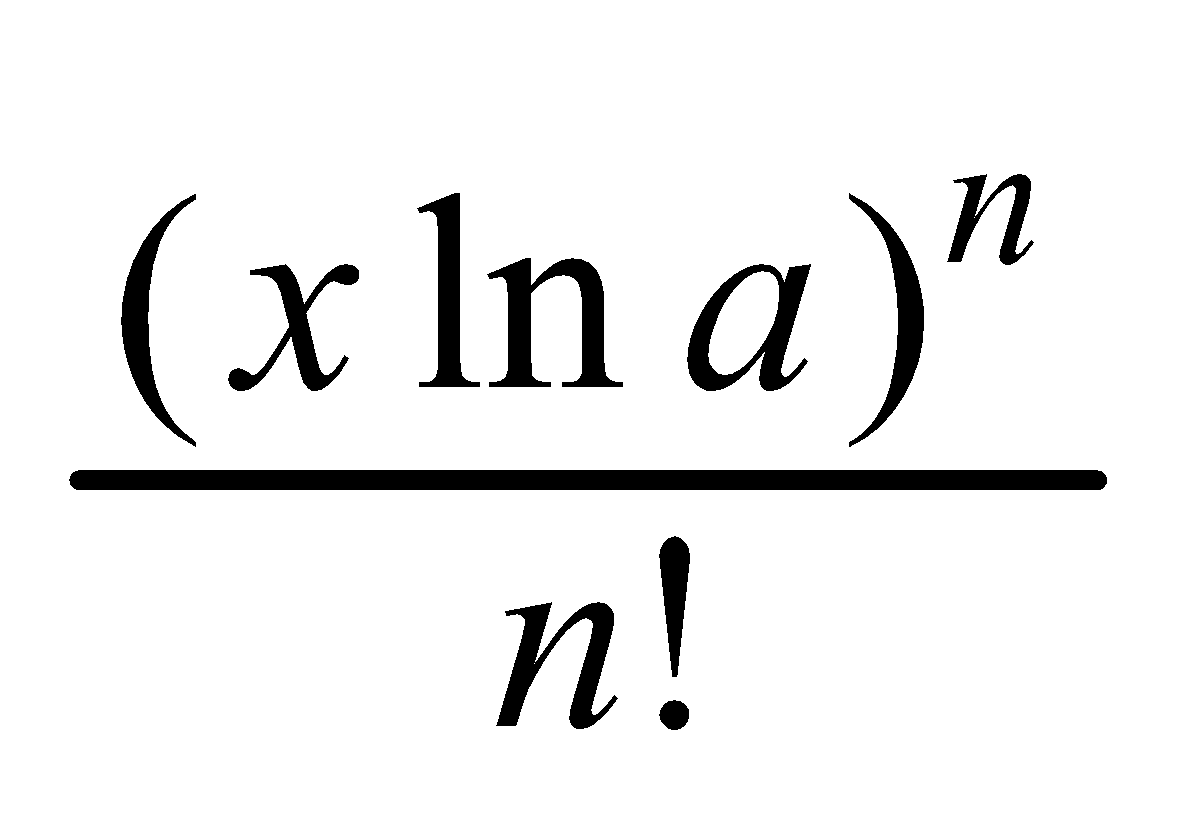 in the series above, the task gave a notation for the factorial

To find out the general statement that represents the infinite sum of this sequence,  it's always required to determine the sum

Using the notations given mentioned and the sequence values, we concluded this table containing the variation of

and it's effect on the

Note for ALL tables and graphs:

The only controlled variable in the table is the

Domain of n is 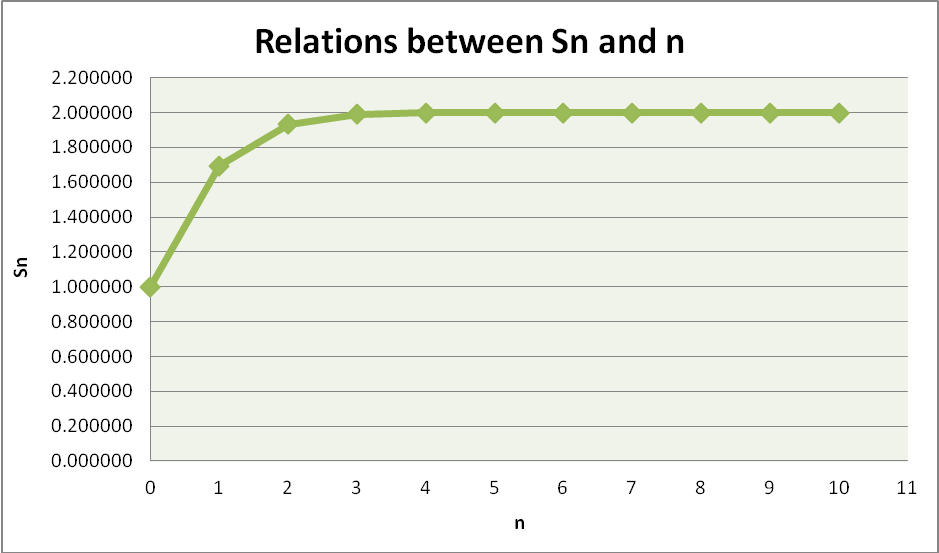 I can notice right now from this plot, that the

Again, let’s plot a graph representing the relation between 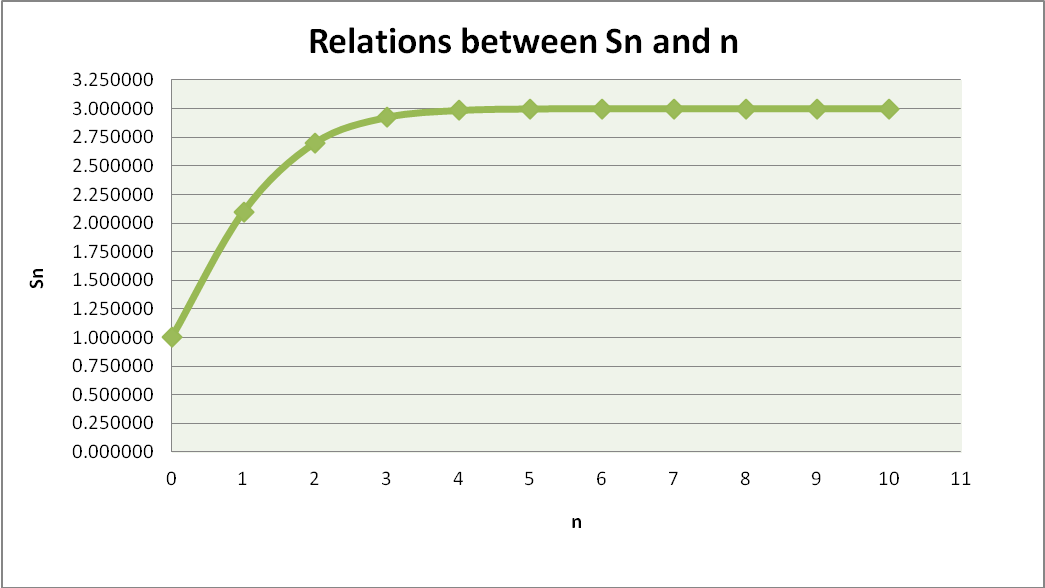 This plot insure the proof that the

value is increasing while the

is also increasing. This time, the graph would not go further

. It's noticeable that the asymptote of this graph is

The limitation that I found in the first trial can be valid, by the statement that as

at the moment, I will evaluate the sum

, and different values of

. The different values of

will be as following 0.5, 0.1, 25. First two trials with rational numbers then the third with a greater number than all the others trials. Before starting this evaluation, we can agree that the

cannot be a zero or a negative value, , because the domain of

is for positive numbers only as (

),also we cannot take a zero beside (ln) as for instance:

Let’s try now the what we planned for, so first try the variable 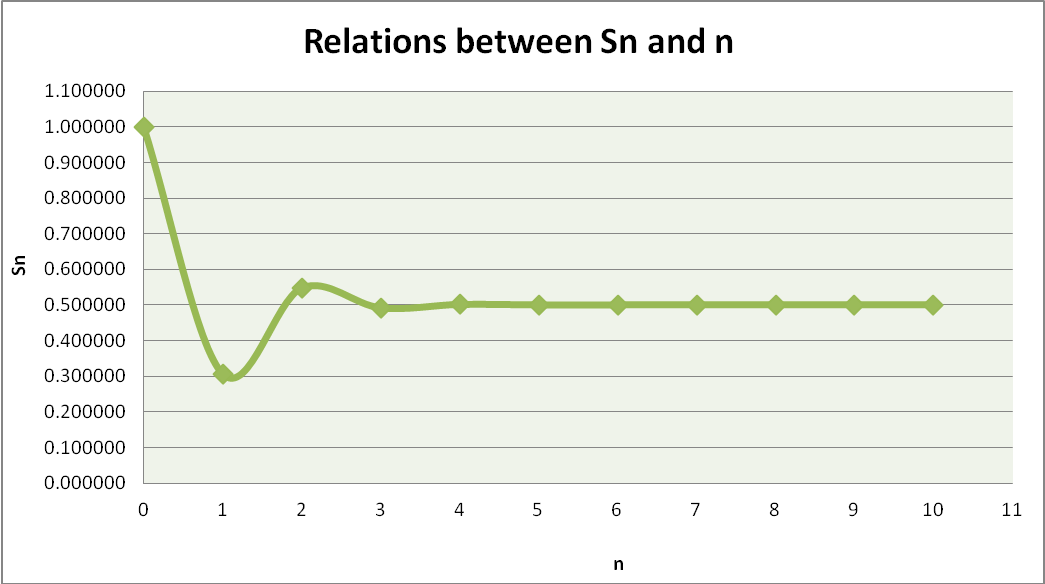 From this trial, the

isn't behaving exponentially, the relation between

rise and fall up and down, and then it reaches

. However, my notice is that it still stands as when as

. In this graph, also I noticed that a

will increase at an exponential rate. So we can now be sure of our statement saying that:

To more insure this statement and go for it in more depth, I tried another trial using

, I observed that there is a quite big difference concerning the result, between the algebraically and geographically ones or it appears also on the tables, as by looking at the graph,

, but on the calculator I found 3 at the power of 5 equals 243.000000. This may be considered as a limitation of the investigation. But the situation was treated by the fact that we are only using the 9th term of the sequence, but if we increase the n value the difference will decrease until it reaches the same result, and the n that equals the algebraically result, is the final term in the sequence...

Now finally getting the final general statements discovered in the investigation, by all the trials above analysis we can finally say that:

This relation can be represented as:

The domain of the general statement is:

So now we can say that:

With respect to domain listed above...

END  OF THE INVESTIGATION...