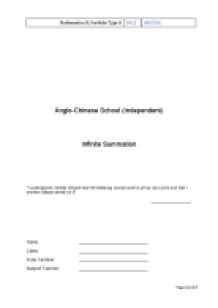 “I undersigned, hereby declare that the following course work is all my own work and that I worked independently on it”

Irrational number: When x=1 and a=2

For when a is a negative number:

A summation is the operation of adding a sequence of numbers, with the result being their sum total[1]. An infinite series is essentially a series with an infinite number of terms. Due to the indeterminable nature of all the terms, mathematical analysis is required to fully understand the series and its properties. However, that is not to say that infinite series are not used often. In fact, they are regularly used in the fields of physics and computer science. [2]In this portfolio, we will be investigating the sum of infinite sequences tnwhere

By observing various trends within the series, I will come up with some general statements and will test the validity of said statements with the aid of some examples. Then, I will try to link the patterns discovered to some pre-established mathematical concepts, such as the Maclaurin series.

As we can see, the above tables prove that the sequence is only applicable to numbers for which the value of [xln(1)]n is defined.

Once again, we see that even for non-integers, while the value of Sn does fluctuate a little, it does eventually reach 0.87 as n tends towards ∞.

From the above examples, we can conclude that a general statement can be made regarding the series, i.e. when x=1, Sn →a as n→∞.

Now let us try to prove the general statement for the series for when x=1, using something more concrete than mere observation. To do this, let us make use of the Maclaurin series[3], explained in detail in the scope section of the portfolio. We will be using the exponential form of the series:

Substituting the values with those of the sequence above:

For when a is a negative number:

The above value is undefined, thus the series does not work for negative numbers.

Which is undefined, thus the series does not work for when a is equal to 0 either.

Thus, we can prove that the series expansion does not work for when a=0, a=1 or

The Mathematics SL Type 1 Portfolio has helped me in many ways. As someone who is not all that great at mathematics, it has helped me tremendously to learn how much the use of technology can aid in the study of mathematics. I also learnt a great deal about infinite summation, the Taylor and Maclaurin series as well as about how they help us even in or daily life. Also, the portfolio has helped me analyze and rethink many of my approaches to mathematics thus far. Thus, from this portfolio I have not only learnt about infinite summation, but a great deal about myself and the influence mathematics has on the world around me as well.