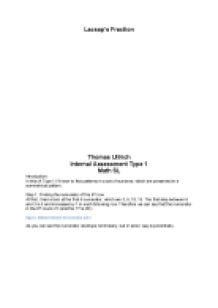 In this IA Type 1 I’ll have to find patterns in a set of numbers, which are presented in a symmetrical pattern.

Step 1: Finding the numerator of the 6th row

Figure 1 Relation between the numerator and n

As you can see the numerator develops not linearly, but in some way exponentially. 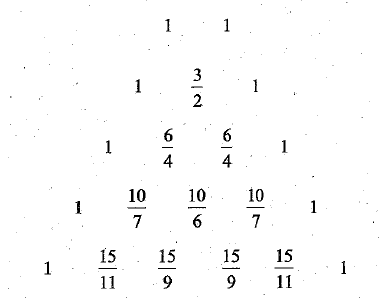 Now it is about finding a pattern for the denominator. 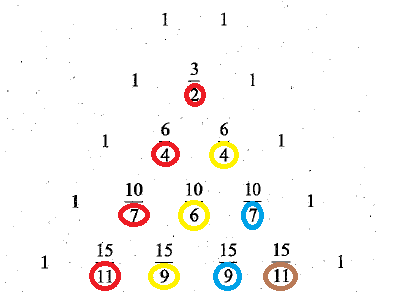 To show the specific pattern for the denominator I marked the sequences which are responsible for the characteristical features of the Pascal’s triangle.

To find b, we put a in equation IV:

To find our last unknown variable c, we put a and b in I:

Now after we found all three unknown variables, we put them in our original, general quadratic equation.

To check, if our expression is correct, we check put in a row number and check if the associated numerator is correct:

The next step is , to find a general expression for the denominator as a function of row number n and element number r.

First of all I’m going to show how the denominator for r=1 (the red circled numbers).

Figure 6 is showing the relation between the denominator and n

To find the general expression for the denominator, we have to use the general, quadratic approach again:

We need three equations to find all three variables. Therefore we put in the numbers from row 3, 4 and 5 and their associated denominators. Remember that we for now look at the red circled numbers

I will shortly explain, how I arrived at my general statement.

With that information I came up with the approach using the general quadratic equation. For the numerator it wasn’t too difficult because I only had to solve 3 different equations in order to get the three unknown variables for Numerator (n) =an²+bn+c.

For the denominator, it was a bit trickier. The first step was similar. Using the denominators values to solve Denominator=an²+bn+c. After solving those three equations, I noticed that the first part of the equation looked similar to the general numerator expression. So I tried to make it the same by adding +0,5n-0,5n in order to get 0.5n²+0,5n in each equation. After that was done, I saw that the last part of the equation was always r²-rn.