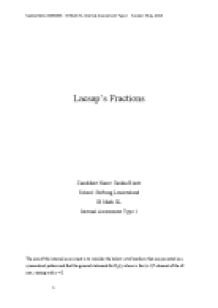 The aim of this internal assessment is to consider the below set of numbers that are presented in a symmetrical pattern and find the general statement for En(r), where is the (r+1)th element of the nth row, starting with r = 0. 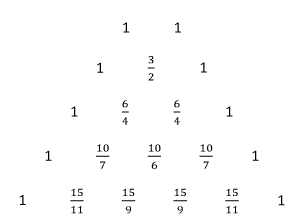 The way Lacsap’s fractions are presented bears a strong resemblance to Pascal’s Triangle, which is also depicted in a triangular shape. Furthermore, spelling the word “lacsap” backwards gives you “Pascal”, which is another indicator of a correlation between the two. When taking a closer look at Pascal’s Triangle, one notices that the numbers in the third diagonal row (in the red rectangle) are the same as the numerators in Lacsap’s fractions. Based on this, the numerator of the sixth row will be 21. To prove this theory, the pattern of the numerators will be examined, using the table below. 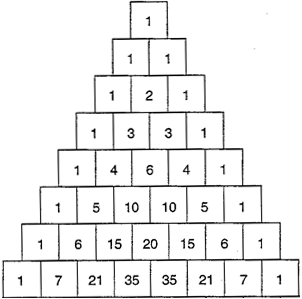 Table 1: Table with the numerator pattern

The graph above shows the relationship between the row numbers (1-5 on the x-axis) and the numerators (ranging from 1-15 on the y-axis). The row numbers and numerators increase at different rates, but both contribute to an ascending line, which looks as though it is half of a parabola. Based on this observation, the graph suggests that the general statement for Lacsap’s fractions is a quadratic equation: y = ax2 + bx + c. Although it would be simple to find out what this quadratic equation is by using a GDC, I have chosen to follow another route and find a different equation.

Since adding all of the numbers individually would take too much time, a general statement must be found to quicken the process. The same dilemma occurs when trying to figure out what the answer is when all the integers from 1 – 50 are added together. To avoid tallying all of the numbers together, it is much simpler to first add the first number (1) and the last number (50) together, which equals 51. When adding the second term (2) and the second-to-last term (49) together, the answer is also 51, because it is the sum of all the pairs in this number sequence.

The 8th and 9th row will be found to further test the validity of the general statement:

The result of the calculations for the 8th row:

The 9th row will be found in the same manner:

During the investigation, the 1’s at the beginning and end of each row were not included in the calculations because they were not fractions. This means that the 1st element of each row was actually the “second” number, because the 1’s were ignored. Therefore, the general statement cannot be used to calculate anything in the first row of Lacsap’s fractions, because that row is composed of two 1’s. Additionally, the general statement is limited to numbers from the set of natural numbers, meaning that they must be integers and positive. Negative, rational and irrational numbers will not yield any results because Lacsap’s fractions starts with the number 1, and any number below that or deviating from that form will not fit the criteria. Apart from these limitations, any row of Lacsap’s fractions can be calculated using this general statement.

[1]Image taken from: <http://www.thirteen.org/edonline/nttidb/lessons/as/buildasw.html>, May 9th, 2012