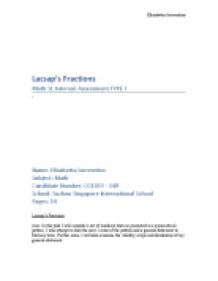 Lascap's Fractions. I was able to derive a general statement for both the numerators and denominators, and prove it for other rows of the pattern

Aim: In this task I will consider a set of numbers that are presented in a symmetrical pattern. I will attempt to find the next 2 rows of the pattern and a general statement to find any term. Further more, I will also examine the validity, scope and limitations of my general statement. 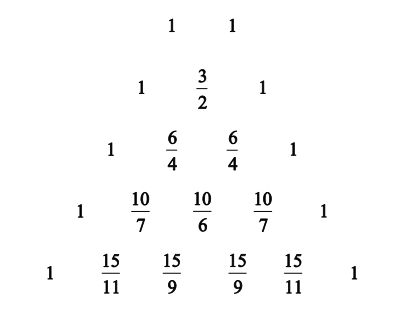 As shown on the diagram, the numerator of the fraction increases as we go down the rows. The pattern is straightforward; it is an addition of the row number to the numerator of the previous row.  The amount added is increased by one each row. This pattern can be easily understood in the table below.

Using Microsoft Excel, I plotted the relation between the row number, n, and the numerator in each row.

From the graph above, I noticed that the trend line of the relation between the row number and the numerator in each row is quadratic.

Consequently, using Microsoft Excel, I plotted the relationship between the element number and the denominator. The graph below shows this relationship.

To represent this graph in an equation for the denominator, I used a graphic calculator to derive the equation using the quadratic regression function, following these steps.

Let n be the row number, D the denominator, r the element number and y the numerator in the row (changing the x,y,b,c variables)

The working below proves the equation right for the second denominator element in the fifth row.

The following working proves the equation right for the first denominator element in the fourth row.

Secondly, the variable n, must be greater than 0. This because there cannot be negative rows, as if plugged into the general statement the answer would be positive, when it should be negative in order to be correct.

Thirdly, the variable r, must be equal or greater than 0, as there cannot be 0 or negative elements in a pattern. For the equation to work, the variable r, has to be an integer, fractions will not work.

In conclusion, through the use of a straightforward pattern, I was able to find the next 2 rows of the given symmetrical pattern. In addition with the use of quadratic regression I was able to derive a general statement for both the numerators and denominators, and prove it for other rows of the pattern. With the help of these two equations, I finally arrived at my general statement. Lastly, thanks to the deeper understanding of the calculation process, I examined in detail the validity, scope and limitations of my general statement.