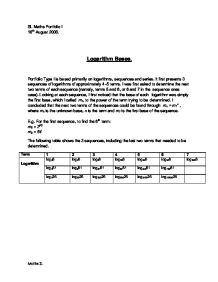 to obtain the third answer in each row from the first two answers and then to create two more examples that showed the pattern as well as to find the general statement that expresses logabx in terms of c and d when logax = c and logbx = d. Firstly, obtaining the third answer, in logarithm form, can be done by multiplying the bases of the first two logarithms. For example, the bases of log464 and log864 will give the base of the third logarithm which is 32. On the other hand, obtaining the third answer when the first two answers are in form can be better explained through the general statement that expresses logabx. When looking at the form, I noticed a pattern could be seen - the product of the numerators of the first two logarithms is equal to the numerator of the third. As well as this, the sum of these two numerators is equivalent to the denominator of the third. Through this information I was able to come to the conclusion that the general statement is: Next I created two more examples that fit the described pattern and also used these test the validity of my general statement. ...read more.

The findings for a values could also be applied to the b values as the base of the third logarithm would be zero or a negative number if either of the first two logarithms were to have a base of zero or negative integer. Therefore b>0. As well as this, I also considered "what if c+d=0?", since 0 as the denominator of the formula would then make it undefined. For a denominator of 0 to be possible, it would mean that c and d would have to be opposites, for example c=8 and d=-8 hence c+d=0. Logarithm log39 log19 2 -2 ERROR As you can see, an error occurred whilst trying to calculate the third logarithm. This is due to the fact that it could not divide by 0. From this it can be determined that a ? and b?. Overall, the limitations of my general statement, , are as follows: x>0 a>0 b>0 a ? b?. As stated previously, my general statement is and has been proven to work under the conditions of the limitations stated before. I obtained this statement by first looking out for patterns created by sequences in both their logarithm and , testing to see if the patterns were shared with the other sequences and then creating a statement that would allow me to express it. ?? ?? ?? ?? Maths SL ...read more.