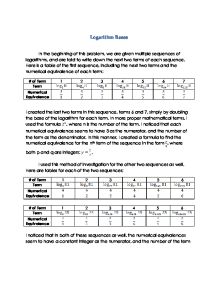 In the beginning of this problem, we are given multiple sequences of logarithms, and are told to write down the next two terms of each sequence. Here is a table of the first sequence, including the next two terms and the numerical equivalence of each term:

I created the last two terms in this sequence, terms 6 and 7, simply by doubling the base of the logarithm for each term. In more proper mathematical terms, I used the formula

I noticed that in both of these sequences as well, the numerical equivalences seem to have a constant integer as the numerator, and the number of the term as the denominator. Therefore, the formula for the first sequence is

, and the formula for the second sequence is

Now, we are asked to calculate a set of many logarithms, in the form

, where p and q are both integers. The set is as follows:

Finding the numerical equivalences of the logarithms was very easy; I simply calculated them using a graphing calculator. The challenging part arose when I was asked to find a way to obtain the third answer in each row from the first two answers in each row. I was also told to let

, and to find a general statement that expresses

This didn’t work, because c+d=0, and the general formula ended up with a 0 on the bottom. When I tried to solve the third logarithm using my calculator, it gave me an error message saying “Divide by 0”.  Therefore,

One more thing that I thought of was that x must be greater than 0, because of the definition of a logarithm. There is no possible way to get any number to equal 0 or any negative number using only exponents. Therefore,

I couldn’t think of any more limitations of the general statement. Here are the limitations that I came up with:

I will now repeat my general statement. If we let

This statement only works with the limitations stated previously. It took me a lot of staring at the numbers and trying different values for a, b, and x, but eventually I discerned a pattern and arrived at my general statement.