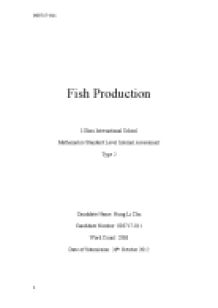 The aim of this internal assessment is to consider commercial fishing in a particular country in two different environments- the sea and fish farms (aquaculture). The table of values below is taken from the UN Statistics Division Common Database. 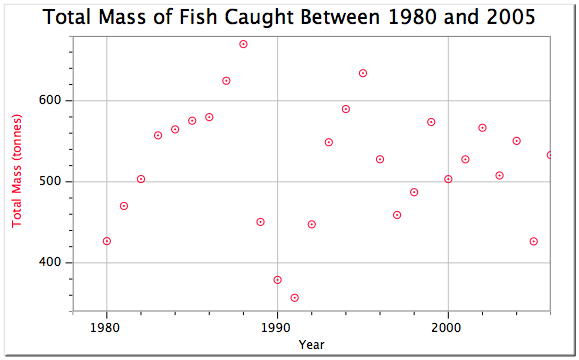 In order to develop a function model that fits the data points, the graph above will be split into 3 sections similar to how the table of values are split in table 1. The values for the years would have to be rearranged. This is done so that at 1980 x=0, and a y-intercept would occur. Therefore, at x=0, the y-intercept should be 426.8.

Judging from the function-modelled graph, the model seems to fit quite well onto the graph because the line passes through most of the points. However, there are limitations to this graph because it cannot be used to predict the values for the next few years. As seen in the original graph, the total mass decreases right after the 8th year. The total mass might have been affected by environmental factors such as pollution, which would contribute to the decreasing population in the sea. This would have an impact on the fish caught in certain years because if there were less fish available, the amount caught would also decrease.

Graph 4: This shows a computer generated linear function and the function model. 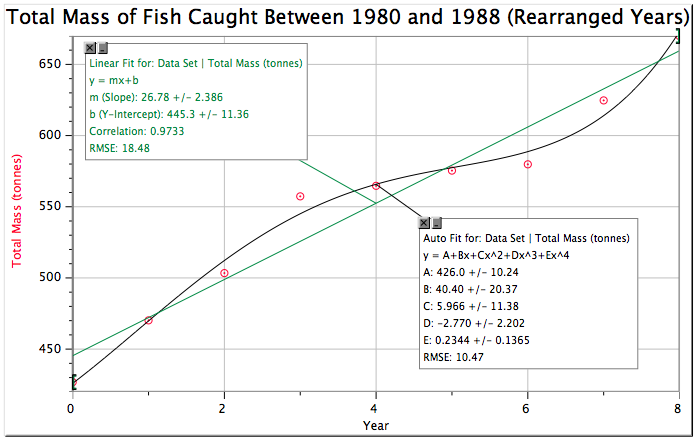 In order to model the next set of values in the 2nd section, another function model will need to be considered because as seen in the quartic model, the graph keeps increasing. On the other hand, the total mass of the original graph plummets after the 8th year.

In conclusion, both models could be used to predict future trends in both types of fishing provided that there are not external factors that might influence the total mass caught. The quartic and the quintic model are fairly accurate in modelling the total mass of fish caught in the sea. Both of the models could be used to predict future trends theoretically. However, these models have limitations because they cannot predict the exact values since the number of fish available each year varies. There may be more fish available in the sea in some years whereas in other years, this may decrease because the fish might have died due to pollution or other forms of human activity. The computer generated cubic model is more suitable when used to predict possible future trends because it is more accurate in modelling the total mass of fish from the fish farms. Since the fish are bred in fish farms, it is possible for people to control the total mass that is caught thus, indicating that the model could predict future trends to a degree of accuracy. By looking at the table of values, the total mass increases continuously every year because it has a lower chance of being affected by environmental or external factors that may decrease the mass of fish produced. Humans can control the number of fish in fish farms; since the total mass increased every year except for 2001 and 2002, it can be assumed that there is a high demand for fish by consumers. The possible reason for the decrease in numbers during the years 2001 and 2002 are probably due to the lower demand by consumers or the errors made by the breeders that resulted in the death of the fish.